Larwyn's Linx: Why Hillary Clinton Should Advertise on Snapchat 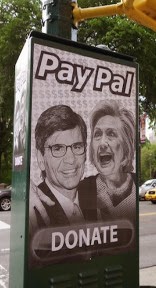 Before ‘The Great Relearning,’ First We Need ‘The Great Unswaddling’: Ed Driscoll
The Houston Chronicle’s Dylan Baddour (@DylanBaddour) Lied About Ted Cruz: Erick Erickson
Like a Leftwing Blogger With Actual Courage in His Convictions: Erick Erickson

American Capitalism: Chopped, Rolled and Smoked: MOTUS
Here We Stand, One Step Away from a Dictatorship: Jeremiah Johnson
First They Came For The Bikers…: WRSA

QOTD: "The Islamic State continued its eastward push from Ramadi in an effort to break Iraqi military forces and Iranian-backed Shiite militias who are gathering at Habbaniyah for a counteroffensive. Iraqi forces established a defensive line outside of Habbaniyah after they were routed in Ramadi. And today, according to Iraqi police and tribal officials, that defensive line has been breached...

...[Allied] airstrikes in Anbar appear to be ineffective and sparse. According to US Central Command, the coalition launched zero airstrikes near Ramadi or Habbaniyah between 8 a.m. yesterday and 8 a.m. today, and only one strike in Anbar, near Fallujah, during that time period. US air power was unable to stop the Islamic State from taking Ramadi." --Bill Roggio

Provided that a realistic measure of inflation adjustment is used,well this will indicate whether the market is falling or rising in purchasing power terms.

This is important!! I changed my independent status to Republican just so I could participate in the primary and vote for Cruz. Once the primary is over, I'll change back to Independent. I think it's important to tell everyone that if they are currently registered as "Independent" - if they want to vote for Cruz, they must change their voter status to Republican, or they won't get to vote for him in the primary. This is very important. You can always change back, but Cruz will not get as many votes as he should if you don't change your voter affiliation to republican. This very, very important - if you are registered as an Independent, you won't get to vote for him in the primary. I know I've repeated myself, but it's so important to get Cruz nominated - if that's who you want.

Today, on open line Friday, Rush Limbaugh actually said something about the Trans-Pacific Partnership! Because someone asked him about it! No football talk today at all!

Odds are Obamatrade screws America? What is this, a casino? We're playing ODDS? If you can't read the secretive bill, YOU DON'T VOTE FOR IT.

Limbaugh proceeded to attack Elizabeth Warren for being a hypocrite. I'm no Warren fan, but she's right here--if the American people can't read the bill, and are prevented from reading it because they'd be against it, it probably stinks to high heaven.

Limbaugh didn't say a word about Orin Hatch, who admitted that he didn't now what he was voting for:

Limbaugh said it was a mystery why McConnell would agree to Obama's secretive trade agreement, but that the reason was to show "bipartisanship."

What an idiot! Mitch McConnell is supporting a secretive trade agreement written by multinational corporations because he's corrupt! Because those corporations are going to hire all these Republicans when they leave! Because they're all looking out for themselves! Duh!

We were told that Republicans would save us from Obama. Now McConnell and Boehner are betraying us and working with Obama at every turn. Rush Limbaugh will never say a word against corrupt Republicans. He should retire very immediately. The country needs brave voices, and that is certainly not Rush Limbaugh in 2015.