In 2009, didn't Barack Obama market his unprecedented $787 billion "Stimulus" program under the banner of repairing America's failing infrastructure? Why, yes, yes he did. 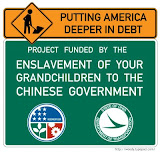 President Obama on Tuesday signed into law the largest spending bill in U.S. history, a package he pledges will save millions of jobs and bring the country back from the brink of economic catastrophe...

He said the federal government will send unprecedented levels of support into infrastructure, education, research, energy, health care and state government. He pledged to enact the bill with an "unprecedented level of transparency and accountability."

At least six people died and many more were injured in a terrible Amtrak accident on the night of May 12, and before the cause had been discovered, multiple cable news networks used the tragedy to make a political point.

Programming on CNN, CNBC and MSNBC all used the accident to claim the government needed to spend more on infrastructure all before National Transportation Safety Board (NTSB) investigators made an assessment to determine the cause of the crash.

Say, Dems: what the hell happened to that $787 billion anyhow?

Oh, and cue the real cause of the accident (hint: what happens when you crank a passenger train up to 106 MPH and hit a curve?): 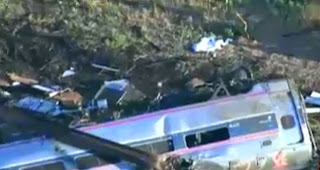 The engineer of the Amtrak train that derailed near Philadelphia -- killing at least seven and sending more than 200 to area hospitals -- applied the emergency brakes just seconds before the train jumped the tracks while hurtling along at almost twice the speed limit, a National Transportation Safety Board spokesman said Wednesday.

NTSB board member Robert Sumwalt, stressing he was working with preliminary information, said the train was traveling at 106 mph as it entered a sharp curve where the speed limit was 50 mph. The engineer he said, launched a "full emergency brake application" a few seconds before the train derailed 11 minutes after leaving the Philadelphia station, crumpling cars and throwing around many of the 243 aboard.

Which leads me to the most astute response to liberal media's insane conclusion-jumping:

Not only was there a three quarter Trillion dollar stimulus, supposedly for infrastructure, but every subsequent budget has had that "stimulus money built into the baseline, so he actually spent six times that, in addition to his enormous deficit spending.

If there was any fault, it wasn't funding, but the lack of competent leadership.

"Say, Dems: what the hell happened to that $787 billion anyhow?"

In the first 3 years of the stimulus, they actually spent $3.2 Trillion. The spending continues to mount to this day.

The reason is that about 1/3 of the bill's spending was on "refundable tax credits". By refusing to pass a budget since the stimulus went into effect, D's have ensured that those "temporary" tax credits are still being handed out today.

It is really help to us. Its give us lots of interest and pleasure. Its opportunity are so fantastic and working style so speedy. Its really a good article. It gives me lots of pleasure and interest.
www.sonuexchange.com