Relayed by Lee Cary from a friend

The date should tell you something! I rode Amtrak from Dallas to Hope yesterday. Got here this morning. 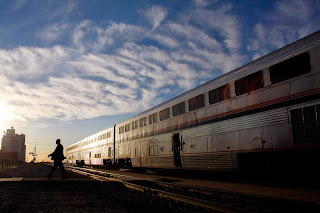 The posted departure time was 3:40 p.m. I got to Union Station early, so as not to miss my train. Isn’t that the way it works at the airport? I should have known better. About 3:15, I got a text saying that the train was delayed. The revised departure time was now 7:51 p.m. If you’re good at math, that’s four hours and eleven minutes late.

Once we got on board, I was pleased to see the nice wide spacing and the comfortable reclining seats. For coach class, I couldn’t complain.

The ride was pleasant, but slow. I had ridden the DART light rail earlier from Plano into Big D. By comparison, the DART is a bullet train. We crept along for what seemed to be forever at 30 mph, tops. Once we got into the countryside, things picked up only slightly.

We made stops in Mineola, Longview, Marshall, Texarkana, before I got off at Hope. The stops weren’t all that long, so you’d think we would have made pretty good time. Maybe even made up some of the deficit. Not. I’m guessing it was due to sequencing with other trains down the line. Whatever, we frequently slowed to a crawl for miles at a time.

Beside the long delay getting underway and the snail pace, my biggest complaint is with the personnel. As passengers, we had contact with the conductor and the steward who had responsibility for our car. Both were marginally competent.

For example, early on we detected the smell of cigarette smoke. Big no-no. Instead of investigating and taking direct action – I mean, how many toilets are there on the coach? – the steward made a public address announcement to the effect that anyone caught smoking would be put off the train at the next stop. I felt like I was back in grade school. Would he demand to smell my clothing?

To make matters worse, the conductor – wherever she was on the train – piped in on the public address system and asked the steward to repeat his announcement, that she didn’t get it the first time. So, he did. Several minutes later, she came down the aisle with a vengeance, went downstairs and repeated the announcement in her own words, just as ineloquently. As she spoke, it occurred to me that her background must have been military, that what she knew of command she had picked up in boot camp.

Being accustomed to air travel, I expected a moderate level of service. We didn’t get it. If you wanted something to eat or drink, it was up to you to go to the lounge car, wherever that was – there were no signs or directions – and get it yourself. Around midnight, I asked the steward for a blanket and pillow. He said he didn’t think there were any available. I never saw him again.

It could have been worse. After all, I did reach my destination. The train arrived at 3:30 a.m. the next day. Note: We lost another hour between Dallas and Hope. The train was now five hours behind schedule! Unbelievably, there was a small crowd of would-be passengers eagerly waiting to board the train for St. Louis or Chicago. Suckers.

As I said, the ride was essentially comfortable. It’s just that it took a long time, and there weren’t any efforts made to make it more pleasant by friendly and competent personnel.

Going back to air travel, flight attendants have such a courteous and thoughtful manner of speaking, even when giving the mandatory flight safety instructions. Not so, last night. Simple announcements sounded crude and unrehearsed. For example, when we were told that “quiet time” began at 10:00 o’clock, the conductor warned us not to made excessive noise. Duh. She didn’t say we’d be thrown off the train if we did, but she came close. She said if we had to talk we should go to the Observation Car, where, “… you can talk as loud as you want to.” Civility and kindness were not in her vocabulary.

So, were my expectations too high, even unreasonable? Perhaps. I had pictured the experience as a flight from Dallas to Hope, except by rail. It was anything but. It was a ride, nothing more.

Do I expect to ride Amtrak in the future? I think not. It may be different in the Northeast, where trains are filled with businessmen and women commuting between the big cities. In our area of the country, the clientele is largely the poor, who choose Amtrak over Greyhound.

Except by necessity, in the future I’ll look for another way to get from Point A to Point B.


At least the author didn't have the terrifying (and apparently all too common) experience of Aaron Heuser of Eugene, Oregon.

A major problem with AMTRAK is the ridiculous labor contracts they enter into. Those people are well paid and there is no competition.

Airplane versus train? Actually, if they haven't brought TSA in, I'll take the train. Actually, if Amtrak would be competent enough to create a route generator, and I could be sure that if the time was off, another train would definitely be available, I might consider train versus driving. I'm still checking on that. I'd prefer idiot employees who get the job done, don't care about someone smoking, don't need smiles and niceties or handholding, I don't take offense at stupid, rude, or useless, so long as I get to my destination at a reasonable cost and don't have to wonder if my goods or jewels will be molested in the process. I can take care of myself.

Sure, I'd love to see the government out of the train and bus business. The businesses would probably be gone, but that's fine too. I'd love to see the government out of every business, especially the ones that would otherwise go away. But apples to apples, unless TSA is now involved, train is preferable unless you like being just another animal to be inspected at random (while they ignore the realistic threats). Probably just drive. My route is too convoluted, by train, perhaps. Otherwise I'd have to back track through Cali over several states, then on to my destination. Not sure I'd see any savings over driving, of time or money. Not sure I can trust a train to still carry on if times are missed. Can't even get a route generated so far, other than I know there is one.

Though, I would like to check prices. There are places I might visit by train. This article actually brought the topic of train travel up, as an option to flying and driving. I've not seen Cali, really. But only on a straight up and back, without connecting, I think... so far.