I've laid this out many times over the years but perhaps it deserves a more-concentrated version. 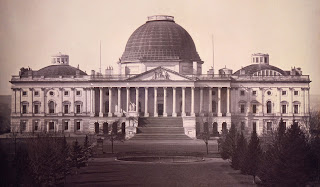 The United States is relatively unique in terms of structure in our governmental system, and has a well-defined hierarchy of laws that the founders put forward a means to respect.  Let's start with that hierarchy, which is indisputable:

An alleged law further down the hierarchy that proclaims something to be illegal (or legal) that is contrary to the provisions above it is void as if it was never passed; it creates no office, it provides no power or shield.  If this general principle is disregarded then there is no law at all since any inferior political subdivision instantly loses its inferior status when it passes such an act.

You cannot believe in a representative republican form of government, nor take an oath to same in any respect and at the same time permit or recognize any such act of usurpation as doing so is a declaration that the political subdivision in question has become superior to those above it.

Further, note that an act contrary to the law does not change the law; it merely ignores or contravenes it.

Now let's take three such examples, all of which are protections afforded to natural law in our Constitution and thus are superior to and thus must void all contrary local, state or federal statutes:

Congress shall make no law respecting an establishment of religion, or prohibiting the free exercise thereof; or abridging the freedom of speech, or of the press; or the right of the people peaceably to assemble, and to petition the government for a redress of grievances.

It is not possible to demand that someone speak or not speak, whether in exchange for money or not, without running afoul of this clause.  It does not say "except if you run a business", for example.  It is impossible to square the First Amendment with a law demanding that someone make and inscribe a wedding cake, for example, as such is quite-clearly speech.  It is further well-settled that photography is speech, as is any other expression of similar kind and character, whether the result is imagery or words.

Further, if I own a piece of property then whatever speech I wish to permit (or not) upon that property is up to me, not someone else.  The Constitution clearly protects this right, and it does not matter whether my decision to speak (or not), or to permit a particular sort of speech (or not) is grounded in religious belief or simply personal preference.  Likewise if I wish to permit people to peacefully assemble, or not assemble, on my property that is my right -- irrespective of why I make that decision.

There is a lawful way to square this with the desire to protect various classes of people from the personal decisions related to speech (or lack thereof), or assembly (or lack thereof) -- it is found in amending The Constitution.  No other means by an inferior form of law stands against the superior law found in the US Constitution if you accept the foundation of this nation as valid -- that the Constitution is the Supreme Law of the land.

A well regulated militia, being necessary to the security of a free state, the right of the people to keep and bear arms, shall not be infringed.

It is not possible to square the Second Amendment with any restriction on the keeping and bearing (possession and carrying) of arms.  All such laws whether at a local, state or federal level are thus void ab-initio.  Specifically the Brady Law, the Gun Control Act of 1968 and the National Firearms Act, along with any State Constitution or statute that is more-restrictive than the Second Amendment as they apply to the keeping and bearing of arms are directly in conflict with said Second Amendment and thus must fall to its clear language.

This does not mean that laws cannot be passed to govern or restrict the use of weapons; they most-certainly can and nothing in the Constitution prohibits that.  So a law barring, for example, "brandishing", or "assaulting with", or similar prohibitions on actions in which a weapon is used are lawful.  But mere possession, openly or concealed, is not use any more than you are "using" a claw hammer if you have one on your belt or in a shopping bag.  It is only your conduct with said weapon that is lawfully subject to regulation; not your ownership or possession of same.

I realize the above runs afoul of many people's belief system but that's immaterial; laws are not beliefs, they are laws.  The Constitution could have been written differently but it was not, and it left no wiggle room in this regard.  Likewise, so-called "laws" barring or forcing registration of suppressors, machine guns and similar are in direct conflict with the Second Amendment.

Had the founders intended for only the National Guard or similar (e.g. police forces) to have the protection of this right they would have said the right of the militia rather than the right of the people.  Again the founders did not grant a "right" to the people they recognized, in the Second Amendment as they did in the First an existing natural law -- a right to defend oneself from any form of unlawful aggression.

There is a lawful means to change this, and that is to amend the Constitution.  Absent such an amendment, however, all such alleged laws must fall to the superior law found in the Constitution of the United States.

The right of the people to be secure in their persons, houses, papers, and effects, against unreasonable searches and seizures, shall not be violated, and no warrants shall issue, but upon probable cause, supported by oath or affirmation, and particularly describing the place to be searched, and the persons or things to be seized.

The Fourth Amendment prohibits searches and/or seizures absent a warrant issued predicated upon probable cause delineating the specific place(s) to be search and the persons or things to be seized.

Any statute or other alleged "law" claiming otherwise is thus void, irrespective of any argument to the contrary.  There is a vast body of laws that are thus blatantly and facially invalid irrespective of what anyone claims.  The NSA's surveillance is just one of these "features"; among others are warrantless use of "Stingers" to trap cell phone communications, "pen registers", "stop-and-frisk", blanket dragnet style events like DUI sobriety (or drug) checkpoints and similar programs.  All of these involve at least a cursory search without a warrant and probable cause and most go far beyond that in that seizure is inherently part of such an action as well.  Even if the seizure is only temporary as is the case with an alleged DUI checkpoint it remains a seizure as the stop itself is not predicated on individualized observation that a violation of the law has occurred -- that is, probable cause.

Again, there is a means to make such statutes legal, but it is found only in amendment of the Constitution.  Certainly during the founding times of the nation we had terrorism; in fact, Muslim terrorism was a problem in the form of high-seas piracy! Further, the King of England certainly considered the acts of those in Boston Harbor just a few years previous to be "terrorism", never mind the acts at Concord that followed. Nonetheless the founders did not seek to invalidate the Fourth Amendment "in the event of suspected terrorist" activity; quite to the contrary.

Now before you stand to rebut any of the above examples with some claim about the Supreme Court and its alleged power let me remind you that The Supreme Court is not empowered, in the founding documents, to alter the Constitution.  It has over time arrogated to itself the power to effectively ignore the Constitution any time it likes (e.g. Wickard .v. Filburn), including by torturing the English language or just flatly ignoring what is written on the page but like any such act of lawless behavior doing so does not void the law just as robbing a bank doesn't make bank robbery legal.  Such an act only brands those who undertake same as lawless individuals and institutions irrespective of any justification they may raise otherwise.

This does not mean that your personal decision to allow a large body of facially void laws to exist and to even follow them may not be one that is purely practical in form and fashion.  After all, refusing to do so may expose you to fines, incarceration or even summary execution as we know all too well.

But America as a nation cannot stand on its foundational principles, nor can we claim to be a Representative Republic so long as we refuse to demand and enforce the hierarchy of law that this nation was founded upon.

By silently acquiescing to such outrages we are ratifying and confirming that this is not a nation of laws, it is a nation of thugs with guns that is indistinguishable in form and practice from that of a crude oligopoly -- that is, our nation's government is little more than a national crime syndicate.  As such we have no room to criticize any other nation for their alleged "abuses" for our own alleged "nation of laws" is nothing other than a grand lie that our political class uses for force amplification against others -- both domestic and foreign.

We, as a nation, need to decide whether this path on which we have allowed our government to embark and in fact continue to press forward is acceptable.  In making that decision we should pay close attention to the fact that whether we are in the "favored" class today or not, and thus "enjoy" what appears to be privilege in this regard that privilege is likely to be transient and, when lost, is quite likely to bring us personal and collective ruin.

Actually, laws are beliefs. You go back, but not far enough back, to see the greater underlying issues. Yes, the Constitution is the supreme law of the land. At the same time, if you don't recognize the source of authority of that supreme law as any greater than any other, then what's the point? It can and should be changed at a whim. If each man is a "god" unto himself, then the natural result of that cultural journey is either chaos or tyranny. There really is no other way for this to end.

Government acts with the presumption of total power over each citizen. It is easy for one branch of government to give other branches permission to expand or maintain their power. It is difficult, for one branch to reign in the power of another branch. This is made even more difficult when a common, power-oriented, ideology pervades members of each branch.