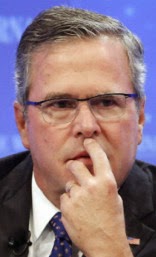 Democrats do the right thing on TPP: RS
Special Forces, Deputies Plan Week Long Exercises: WLTX
Why Is That Cop's Finger in Your Butt?: Jacob Sullum

Qatar to Free Taliban Commanders Exchanged for Bergdahl: Breitbart
Obama Admin Is Training “About 90″ Syrians to Defeat ISIS …(That Ought to Do It): GWP
Leftism is Just Religion for the Godless, Continued: Ace

Document: Jade Helm Commander Plans to “Operationalize The CONUS Base": Old-Thinker News
“Why Is That Girl In the Senate Opposing My Plans?”: MOTUS
Government Censorship on the Rise: Betsy McCaughey

QOTD: "Hillary Clinton, to be candid, is a habitual fabulist. She entered public life lying about everything from her 1-1000 cattle futures con to the location of her law firm’s subpoenaed legal documents. Recently she has been unable to tell the truth in any context whatsoever. She will lie about big and small, trivial and fundamental, from the immigrant myths about her grandparents to the origins of her own name Hillary to her combat exposure in the Balkans. The subtext of “what difference does it make” was something like: “Even if you find out that I lied about the run-up to and follow up on the Benghazi killings, it won’t matter in the least to my career.” She was right, of course, in her assumption that lying had career utility and brought more pluses than negatives, as her current presidential campaign attests.

Her press conference on the disappearing emails was unique in American political history in that everything Ms. Clinton said was, without exception, a demonstrable untruth. It is not that no one believes her, but rather than no one can possibly believe her when she insisted that she would have needed multiple devices for multiple email accounts, or that public officials routinely alone adjudicate what is and is not public and private communications, or that other cabinet officers apparently created, as she did, exclusively private email accounts — and servers — for public business or that security personnel on the premises protect the airwaves from hackers. Even her own supporters know that she lied, and trust that it likely will not hamper her presidential run. Her life has become about as real as that of Annie Oakley’s.

Both Hillary and Bill Clinton lied about almost every aspect of the Clinton Foundation. She knew that the foundation was created to spend 90% on travel and insider salaries and benefits, and 10% on direct grants to charities, that it offered thin moral cover to skullduggery, and that it drew donations from zillionaires, who in turn offered Bill Clinton lopsided lecture fees that he otherwise would not have commanded, and expected favorable U.S. government treatment for their cash. Hillary assumed that beneath the skin of a “charitable organization” the three Clintons ran a veritable shake down operation that resulted in mother, father, and daughter becoming multimillionaires. The Clintons will expect the issue to dissolve, either on the premise that the notoriety cannot do much more damage to the already sullied Clinton name, or that the Democratic Party feels that it can nominate no other candidate who raises as much money and is so recognizable as the proverbial prevaricator Hillary Clinton." --Victor Davis Hanson

Hillary and Bill have been lying for so long about so much that it (lying) is a normal body function for them. It's an unconditional reflex. They don't even think twice about it, until they are caught. And, even then, since they have built an enormous lying "machine", and so many are beholden and/or fear their "revenge", they get away with it. They both are scum. Immoral, unethical, arrogant, lying scum.

RUSH LIMBAUGH IS NOT ON OUR SIDE, CONTINUED: Another day, and Rush Limbaugh has still not said ANYTHING about the TPP. He spent valuable airtime talking, once again, about deflated footballs. Limbaugh will not say ONE WORD to stop corrupt Republicans from destroying our country forever. What good is he? Why isn't everyone else noticing this?

Marco Rubio is supporting the TPP. He also supports amnesty. Rubio is dead to me. No senator should vote for a secret agreement they are not allowed to read and talk about.

Charles Krauthammer is not on our side, either. He's come out in support of the secretive agreement THAT HE'S NEVER READ.

BOTTOM LINE: If Barack Obama is for it and if he's keeping it secret, it's not good for you!