If anyone else had done what Hillary did, they'd be serving five to 10 in Leavenworth. Because it would appear that Granny Clinton received now-classified documents on her private email server. 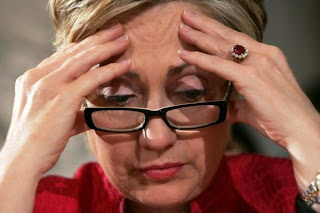 The Associated Press ... revealed on Friday that Clinton received information on her private email server that has now been classified about the deadly attack on U.S. diplomatic facilities in Benghazi.

The email in question, forwarded to Clinton by her deputy chief of staff Jake Sullivan, relates to reports of arrests in Libya of possible suspects in the attack.

The information was not classified at the time the email was sent but was upgraded from “unclassified” to “secret” on Friday at the request of the FBI, according to State Department officials. They said 23 words of the Nov. 18, 2012, message were redacted from the day’s release of 296 emails totaling 896 pages to protect information that could damage foreign relations.

Because the information was not classified at the time the email was sent, no laws were violated, but Friday’s redaction shows that Clinton received sensitive information on her unsecured personal server.

In fact, I'd be willing to bet that Hillary's email server -- which effectively disappeared gigabytes of information -- received plenty of then-classified info. Which is one major reason said emails were disappeared.

The other, of course, being the Clinton Global Graft Initiative.