PASS THE POPCORN, NAHANNI: Nancy Pelosi says "The Clintons will have to answer for the Foundation"

That's what she said, although her speech was garbled by well nigh two dozen plastic surgeries (thanks to an estimate by Chuck Frobish of Chucks's Discount Plastic Surgery). 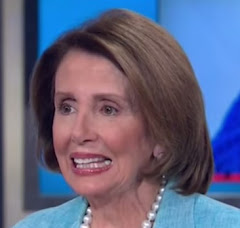 Nancy Pelosi told MSNBC that "the Clintons will have to answer for the foundation."

The comment came after Pelosi was asked about a story in the New York Times that states Bill Clinton accepted an award at a charity event only after that charity paid the Clinton Foundation $500,000.

"The former president of the United States agreed to accept a lifetime achievement award at the June 2014 event after Ms. Nemcova offered a $500,000 contribution to the Bill, Hillary and Chelsea Clinton Foundation. The donation, made late last year after the foundation sent the charity an invoice, amounted to almost a quarter of the evening’s net proceeds — enough to build 10 preschools in Indonesia," the Times reported.

Frankly, the facial contortions Ms. Pelosi has tortured her face with look -- to me, at least -- somewhat painful.

One would think that after amassing well somewhere around $30 million as a "public servant", Pelosi would be ready to retire.

Although, like many members of the Senate, perhaps she's using the perqs of office as an assisted living center.