Saudis Being Drawn Into Obama’s War

Dan from New York asks, "How do you say 'Thank you, Mr. Obama' in Arabic?" 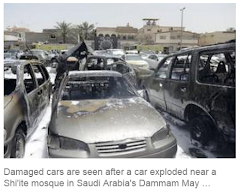 ABU DHABI/DUBAI (Reuters) - An Islamist militant suicide bomber disguised as a woman blew himself up outside a Shi'ite mosque in eastern Saudi Arabia on Friday, killing himself and three other people, the second attack of its kind in the world's top oil exporter in one week.

The bombing, which was claimed by Islamic State, could further escalate sectarian strife in the kingdom, where anti-Shi'ite sentiment has been stoked by a military campaign against Iranian-allied Houthi militias in neighboring Yemen since March.

The Interior Ministry said a suicide bomber disguised in women's clothes blew himself up outside the al-Anoud mosque's entrance in the city of Dammam during noon prayers.

Witnesses said a suicide bomber, who wore an Abaya used by women in Saudi Arabia, blew himself up in the mosque's parking lot when guards searching worshippers became suspicious of him.

These kinds of attacks validate Foreign Policy's recent prediction that "...the Islamic State may be debuting a new strategy: lone-wolf attacks inside the kingdom."

Consider: under Obama, Hillary and Kerry, we have been left with an Iran ("Death to America!") on the brink of nuclear weapons, ISIS, an Al Qaeda-run Libya, a blood-soaked Syria, and a collapsing Iraq.

A nuclear Middle East is the Democrat Party's "legacy", starting with Jimmy Carter and extending all the way to Obama and Hillary.