Writing at The New York Post, Paul Sperry offers an excellent suggestion to the House Select Committee on Benghazi: "call... Cheryl D. Mills to testify — under oath, and under the klieg lights."

Hillary Clinton had named Mills responsible for "identifying and preserving all emails that could potentially be federal records." 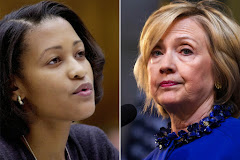 The job of damage control has fallen to Mills through a parade of scandals. Her lack of cooperation is legendary. In fact, she’s been officially accused of both perjury and obstruction of justice.

Sworn affidavits, depositions and court rulings, as well as congressional reports and testimony, paint a picture of, to put it charitably, a brazenly dishonest cover-up specialist...

• As White House deputy counsel, Mills ordered Commerce Department officials to “withhold” from investigators emails and other documents detailing then-President Bill Clinton’s and first lady Hillary Clinton’s allegedly illegal selling of seats on foreign trade junkets for campaign cash, according to sworn statements by Commerce’s former FOIA chief. “Ms. Mills, in her position as deputy counsel to the president, advised Commerce officials to withhold certain documents,” testified Sonya Stewart Gilliam in a July 2000 sworn affidavit taken by Judicial Watch, a government watchdog group in Washington. “The Commerce Department’s collaboration with White House Deputy Counsel Mills on these matters was, in my experience, highly irregular and at variance with normal procedures.

• At the same time, a federal judge ruled that Mills “failed miserably” to take proper steps to search for and recover 1.8 million Executive Office of the President and Office of the First Lady emails under subpoena in the Monica Lewinsky and Filegate scandal investigations, after computer contractors discovered them mysteriously missing from the automated White House archiving system. Mills, who was in charge of finding the lost email, conveniently made “the most critical error” in recovering them, US District Judge Royce Lamberth concluded in a 63-page opinion, adding that he found her actions “loathsome.” In fact, Judicial Watch accused Mills of orchestrating a “cover-up” in what became known as “Email-gate.” Her court testimony in the case, during which she repeatedly answered “I don’t have a recollection,” sounds like an interview with an amnesia patient. (In the end, the emails were never recovered.)

• In another scandal, Mills “concealed” so many subpoenaed emails and other documents detailing allegedly illegal fundraising activity between the White House and the Democratic National Committee — specifically, Hillary’s illegal integration of White House and DNC computer databases — that staff lawyers for the House Government Oversight Committee in 1998 sent a criminal referral to the Justice Department demanding federal prosecutors charge Mills with obstruction of justice and perjury. “Ms. Mills knowingly and willfully obstructed the investigative authority of this committee by withholding documents,” the panel concluded in a 647-page investigative report. “Moreover, when this obstruction was brought to light in a hearing before the committee, Ms. Mills lied under oath about the documents and the circumstances surrounding their nonproduction.”

• In October 2012, Mills sorted through key Benghazi documents and decided which ones to withhold from an independent review board. She also leaned on witnessses. Deputy ambassador to Libya Gregory Hicks testified before Congress in 2013 that Mills told him in an angry phone call to stop cooperating with investigators.

• On behalf of the Clintons, Mills negotiated the weak conflict-of-interest rules for disclosing foreign donations to the Clinton Foundation with the Obama administration. She also reportedly helped broker international payments to the group.

Sperry says that a source with the committee indicates that if Mills is called to testify, it would most likely be in private. Sperry calls that a "mistake", indicating a public committee hearing would be best to put pressure on Mills.

Why not convening both a public and a private hearing?

There's something to be said for having a professional investigator tirelessly interrogate Mills outside of the circus-like atmosphere of a public hearing.