Why the Clinton Foundation Scandal Should Terrify Every American 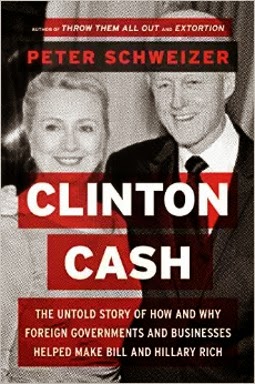 One of the last vestiges of broad-based bipartisan agreement in American politics is the belief that foreign money should not influence U.S. political leaders and their decisions. The Supreme Court has unanimously upheld the ban on foreign political money, and President Barack Obama and Republicans have echoed similar themes.

We now know that the Clinton Foundation served as a conduit for the flow of hundreds of millions of dollars from foreign individuals, entities, and governments. Moreover, during Hillary Clinton’s tenure as Sec. of State, former President Bill Clinton received numerous lucrative speaking fees funded by foreign entities, including a $500,000 Moscow speech paid for by a Kremlin-linked bank with interests pending before Mrs. Clinton’s State Dept.

But does any of this matter? Moreover, is it, as some have intimated, akin to “bribery”?

As Secretary of State, Mrs. Clinton made combatting corruption by foreign actors “a major focus of U.S foreign policy,” as her spokesperson at the time put it. More specifically, she pledged her support for the Organization for Economic Cooperation and Development’s (OECD) “anti-corruption agenda.” So, how does the OECD define bribery?

Unlike political campaign contributions that are illegal for foreign executives and governments to donate to, a U.S. politician’s charity can capture all foreign donations, with no restrictions. Such financial pass-throughs run afoul of the longstanding American tradition that opposes the infiltration of foreign money into U.S. politics.

Their comprehensive definition extends to the transfer of funds even “when someone other than the official who was bribed receives the illegal, benefit, including a family member, business partner, or a favorite charity of the official.”

Just ask pharmaceutical company Schering Plough. In 2002, they settled with the Securities and Exchange Commission (SEC) over charges they funneled $76,000 to the “Chudow Castle Foundation” in Poland, a legitimate charity that helps restore castles in an effort to preserve Polish cultural heritage. The SEC, however, said the gift was an effort to sway a Polish government health official who sat on the charity’s board. During her tenure as Secretary of State, Mrs. Clinton declared she was “unequivocally opposed to weakening” the FCPA and supported its aggressive enforcement.

And therein lies a core concern for those opposed to corruption: charities, despite their noble exteriors, frequently come under financial scrutiny and should. This is especially true of the Clinton Foundation; its operational structure and principals offer the ideal back-door method—especially when sweetened with speaking fees for Mr. Clinton—for foreign entities that cannot legally contribute to U.S. political campaigns to instead circumnavigate election laws in an effort to curry favor with the Clintons.

So, were rules broken?

Despite Mrs. Clinton’s promise she would disclose all Clinton Foundation donations on her charity’s website, my book "Clinton Cash" reported five hidden foreign donations totaling millions of dollars that never appeared on the Clinton Foundation website. As the Wall Street Journal reported, four of those donations totaling $2.35 million came through Ian Telfer, the former head of the Uranium One, a company which sought and received approval from nine agencies including Mrs. Clinton’s State Department to sell its assets—including 20 percent of all U.S. uranium—to the Russian government.

Did the eight other agency heads receive eight-figure donations? Or have spouses who received $500,000 speaking fees for a Moscow speech funded by a Kremlin-linked bank as the Russian government aggressively pursued the acquisition of 20 percent of U.S. uranium?

It is important to remember that Clinton Foundation transparency requirements for donation disclosures came not at the insistence of conservative Republicans in Congress; rather, the Obama transition team required the memorandum of understanding in order for Mrs. Clinton’s appointment to proceed. During her Senate Foreign Relations Committee testimony, Mrs. Clinton assured senators she would disclose all donations. And Mr. Clinton told CNN he and Mrs. Clinton were committed to providing “complete transparency.”

That did not happen. Not even close.

Last week, news outlets uncovered more secret foreign donations to the Clinton Foundation—1,100 hidden donations to be exact. The identities, financial dealings, and levels of interaction with Mrs. and Mr. Clinton are as yet unknown.

What is clear is that progressive and conservative concerns about the Clinton Foundation’s acceptance of contributions from foreign governments, entities, and individuals are warranted. Unlike political campaign contributions that are illegal for foreign executives and governments to donate to, a U.S. politician’s charity can capture all foreign donations, with no restrictions. Such financial pass-throughs run afoul of the longstanding American tradition that opposes the infiltration of foreign money into U.S. politics.

The onus is on Mrs. Clinton to demonstrate that this standard has remained inviolate.

Peter Schweizer is the president of the Government Accountability Institute and the author of Clinton Cash (Harper Collins 2015), Clinton Cash: The Untold Story of How and Why Foreign Governments and Businesses Helped Make Bill and Hillary Rich

The only difference between Obama and the Clinton Crime Family Foundation is that TheOne got his foreign money in small chunks, on the web, and with plausible 'oops' for cover, while the Clintons did it openly and grandly, because they're the Clintons. No rules apply to any Democrat, unless you are to be made an example, after having crossed a more powerful Democrat. Honesty, ethics, and the rule of law are for non-Democrats only, as defined by and applied by Democrats.

That's not to say "the other side" has clean hands; those given a pass have been excused by equally entangled liberals. Why on Earth would anyone spend millions of donated funds to obtain a $178,000 per year job, from which they "retire" a multi-millionaire? Earning it takes far too long, that's why.

We have a communist president. If it takes this to terrify you, you have a lot of catching up to do.