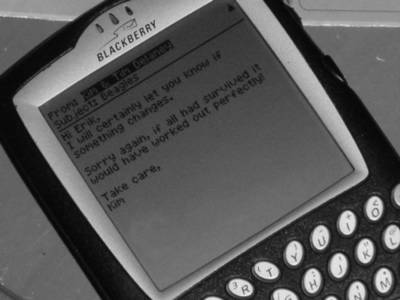 Let's summarize the recent news in the legal battle between RIM and NTP; and we'll try to play Kreskin regarding where the case is headed:

11-12-2005 - [T]he federal government injected itself in the protracted BlackBerry court fight, where NTP is suing BlackBerry's maker, Research In Motion, over patent infringement. The feds filed a "statement of interest" with the court, saying the U.S. government is a major BlackBerry user, and the court should refrain from issuing any injunction that would shut government BlackBerries down... "It’s really like eminent domain," says patent lawyer Jesse J. Jenner, partner at Ropes & Gray. "It’s very powerful..."

12-14-2005 - Visto's newly-filed patent infringement suit against Microsoft and its teaming with NTP could result in the entire [mobile email] market grinding to a screeching halt...

12-15-2005 - The Patent and Trademark Office (USPTO) announces that it will create a dedicated team to complete the review of NTP's patent claims. Its statement is telling: "Given the district court's concerns that the office has delayed the proceedings and the outstanding public interest in ensuring that these proceedings are acted upon with special dispatch, the office has assigned a dedicated examining team to handle all of the co-pending proceedings..."

12-16-2005 - U.S. District Judge James Spencer has set final brief filing deadlines of February 1st for NTP and Research in Motion in the NTP vs. RIM patent infringement case. Both sides have until January 17th to file briefs and until the start of February to respond to each other before filing final briefs...

12-17-2005 - Research In Motion spokesman Mark Guibert notes that, "NTP has been improperly attempting to slow down the anticipated rejections from the patent office, even going so far as to recently attempt to bog down the patent office with a highly unusual request to process filings for over 30,000 new patent claims..."

12-19-2005 - The United States Patent and Trademark Office took the unusual step of notifying the companies that it expected to reject the five patents held by NTP in its final rulings... The office has issued preliminary rejections of all five wireless e-mail patents in the past. The final rulings may come by mid-February, earlier than expected. [The Judge in the RIM/NTP case] ...has set a timetable for hearings on issuing an injunction against R.I.M. that could coincide with the timing of the patent office's final rulings...

Update: an unverified description of the RIMM, "just in case" workaround is circulating.
at 9:18 AM
Email ThisBlogThis!Share to TwitterShare to FacebookShare to Pinterest