A worthy successor to Starship Troopers 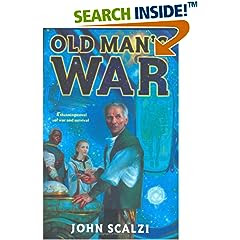 In my biennial foray into the Science Fiction genre, Scalzi's first novel came highly recommended by Amazon's algorithms. As a huge fan of Heinlein and, especially, Starship Troopers, Old Man's War promised a similar terrain of interstellar warfare spearheaded by Earth and mankind.

Scalzi doesn't disappoint. His clever, to-the-point plot introduces John Perry, a widower just turned 75. By dint of his age, Perry is now eligible to join the Colonial Defense Forces, a shadowy crew pledged at expansion of mankind's footprint throughout the galaxy. Perry doesn't have much to lose, after all. Though details of his transformation into a CDF soldier remain classified on Earth, he's lost his beloved wife and is fully aware of his diminishing physical and mental abilities.

After signing up for what appears to be a two-year stint, he soon finds out that his term is going to be closer to a decade. But he'll have the body to match. His physical transformation into a super soldier -- no spoilers here -- is truly remarkable. But he'll need every bit of his new capabilities because the enemies arrayed against humankind are powerful, enigmatic, and quite violent.

Scalzi has woven together compelling technical details (the physics behind the interstellar "skip" drive), including genetic engineering, the tactics of interstellar warfare, human-computer interfaces, and robotics into a first-class story. Fans of Starship Troopers won't be disappointed. And those who relish Heinlein stories will be clamoring for more Scalzi.
at 2:46 PM
Email ThisBlogThis!Share to TwitterShare to FacebookShare to Pinterest