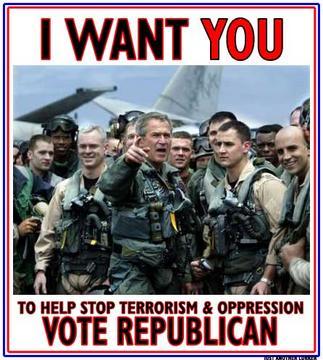 The mediacrats have no traction. There's been a heartening lack of uptake achieved by old media with its NSA international wiretap story. The new media -- talk radio and the blogosphere -- has successfully repelled the bizarre and highly illegal disclosures of said taps.

The mediacrats always seem to forget that stark, gaping hole in the middle of Manhattan, which represents -- to most Americans, anyway -- the fact that we are still at war. And they won't show us pictures of jet planes flying into skyscrapers or the Pentagon any more, perhaps for fear of whipping the citizenry into a patriotic fervor.

In their zeal to defeat the Republican agenda, the mediacrats have conveniently "dis-remembered" the fact that we're at war. The latest example? Tom Daschle's feeble and revisionist op-ed in the Washington Post, the gist of which was (and I'm paraphrasing here, because Daschle's piece is well nigh unreadable):

"Our authorization for use of force that Congress gave the president September 14th, 2001 never included 'in America'. It only included people that had any association with al-Qaeda."

Tom here's a news flash: there are, were, and will be affiliates of Al-Qaeda living in America.

Tom Daschle is the poster boy for the Democrats' unseriousness about the war on terror. Do a little thought experiment. It's September 15, 2001 and the NSA finds a terror cell in Oklahoma City making regular, suspicious calls to a satellite phone in Kandahar. In the bizarro-universe Tom Daschle has constructed, the US would be unable to pursue these calls and shut down the cell.

Although, to be fair, that makes about as much sense as anything else the Democrats have done lately. And this is precisely why, at the conclusion of the op-ed, Daschle is described this way: "a former Democratic senator from South Dakota". The electorate knows his type is as extinct as the mastodon. He's an ex-senator on an arthritic revenge jag with an agenda as transparent as glass in front of an arc-light.

The Democrats are now in full swing with their campaign of historical revisionism. And the mainstream media simply calls in the cavalry, doing things like running "news stories" on Daschle's column. That's right, not only do they publish a pathetic op-ed penned by a political has-been, but then they accompany it with a "news story" calling attention to the op-ed. In the same issue.

No matter, the mediacrats have no traction at all. The polls plainly show it. The President's rising approval numbers, the economy barreling down the tracks, the drawdown from Iraq, victory in sight... the mediacrats are simply spinning their wheels, not making any headway with the public.

After all, who can take them seriously? Their continual attempts to rewrite history books won't cover up their agenda, which has failed them year after year and decade after decade.
at 10:02 AM
Email ThisBlogThis!Share to TwitterShare to FacebookShare to Pinterest