You won't be confused by the plot 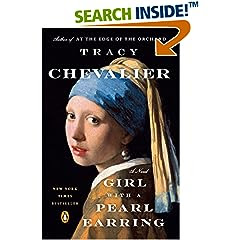 I'm a sucker for historical fiction. Gary Jennings' Aztec and Ken Follett's Pillars of the Earth are probably the most enjoyable examples of period fiction based upon historical fact (with plenty of author's license utilized, to be sure). For an educator, historical fiction is a great way to introduce the study of a period without the usual commensurate pain.

Chevalier's Girl with a Pearl Earring was laying around our house (required reading by my 16 year-old for her AP history class, I believe). The reviews on the back cover were stunning: the Times, Journal, Chronicle and others waxed eloquently; depicting the novel as a compelling blend of 17th century Holland, the paintings of Dutch master Johannes Vermeer, and the origins of one of his most famous paintings.

The painting is, of course, "Girl with a Pearl Earring," also known as "the Mona Lisa of the north." An enigmatic young woman is featured in the painting (and on the book's cover). She is imagined by Chevalier to be one of Vermeer's maids named Griet. Griet is shy, intelligent, and too-pretty-for-her-own-good. Forced into servitude by her father's unexpected blindness, Griet becomes an essential part of Vermeer's busy household.

Cleverly navigating the domestic politics of a household spilling with children, a grandparent, and other maids, Griet soon finds herself receiving attention not only from Vermeer's wealthiest patron but also the great master himself. How she deals with these difficulties forms the very essence of the book.

Unfortunately, the book's plot is so simplistic as to be almost 233 pages of nothingness. Imagine a Seinfeld episode taking place in the 17th century without any humorous characters, and you've pretty much got the idea. As for 17th century Holland, consider it unvisited. There were few details that would satisfy the mildly curious, not to mention someone truly interested in the period. Despite an elegant writing style, this book could have been the length of a magazine article without missing a beat.
at 3:00 PM
Email ThisBlogThis!Share to TwitterShare to FacebookShare to Pinterest