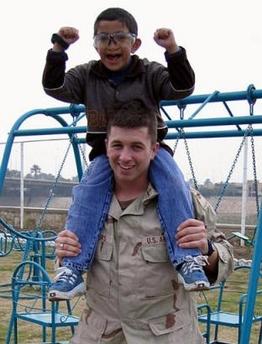 The invaluable NewsBusters notes a San Francisco Chronicle cartoon that simulates Al Qaeda propaganda planted in a US newspaper. The supposed analogy is, of course, the report that Iraqi journalists were paid to report news stories that portrayed the US military in a positive light.

Let's ignore the moral equivalency aspect: that the US military, liberating an entire country, is somehow equivalent to death-dealing terrorists that intentionally target children during toy hand-outs.

And let's ignore the fact that the mainstream media had very little to say when CNN revealed it had covered up Saddam's atrocities for years so that it could keep its Baghdad bureau open.

One need only take a gander at Al Jazeera's website. Their talking points -- the Al Qaeda spin regarding US involvement in Iraq -- are straight out of the Howard Dean, Nancy Pelosi, and Chuck Schumer playbook. And they are readily echoed, on a daily basis, by the willing mainstream media.

The Chronicle's bogus analogy has all the intellectual honesty of Pinnochio on a losing streak in Vegas. Maybe the mediacrats will get one right someday, but I wouldn't hold my breath. Unless I was being driven around on Martha's Vineyard by Teddy Jo Kennedy.
at 6:24 AM
Email ThisBlogThis!Share to TwitterShare to FacebookShare to Pinterest