The US Government intercedes in the BlackBerry dispute 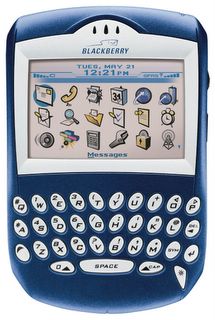 I've carefully read the US Government's statement to the court regarding the NTP patent lawsuit against RIMM (the maker of BlackBerries). And I've noticed some interesting tidbits that haven't been mentioned in the news. The government stated:

Okay, the US Government wants to keep their BlackBerries operational whether or not an injunction occurs. Fair enough. But...

If this interpretation is correct, then, in the event of an injunction, RIMM must be permitted time to acquire and filter all federal, state, and local user network traffic. That is, someone will have to assemble a comprehensive list of all federal BlackBerry users, government contractors, the affected personnel in all fifty states, a countless number of localities and first responders, etc.... before the injunction can be levied!

And, to complicate matters further:

No wonder RIMM seems to be dawdling. Just assembling that that list might take longer than the US Patent and Trademark Office's final determination on the patents.

And here's another interesting tidbit:

Every member of Congress has a BlackBerry? That's quite a constituency.

The Government also mentions the patent review, in which the USPTO has ruled (in a preliminary determination) that some of NTP's patents may be predated by "prior art", which would render them useless.

The phrase "may issue" is interesting. Why would the PTO make a final determination within 90 days? Unless, of course, something is happening behind the scenes...

Lastly, the government notes that civilian users will be impacted:

Having read the entire statement, I think I now understand why RIMM is playing "four corners".

US government steps in to BlackBerry litigation

Update 12/10/2005: Forbes notes that in the few cases the Government interceded with a similar sort of patent dispute, the Judge determined no injunction was necessary and/or threw the case out. While the latter possibility is unlikely, patent lawyer Jesse J. Jenner, partner at Ropes & Gray called the letter 'very powerful' and likened it to eminent domain.
at 10:02 PM
Email ThisBlogThis!Share to TwitterShare to FacebookShare to Pinterest