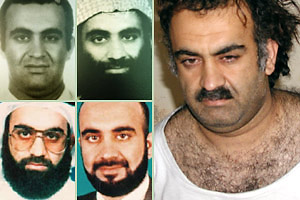 Over at Townhall, Tony Snow has excellent advice for the President: "Call their Bluff." He reckons that forcing a vote ought to flesh out the propriety of the NSA international wiretaps once and for all.

Let's see if we can figure this one out.

1) Has the enemy launched a massive surprise attack on the scale of Pearl Harbor? Check.
2) Has the enemy has promised to kill four million Americans, including "two million children"? Checkety-check.
3) Has the enemy repeatedly tried to acquire nuclear, chemical and/or biological weapons? Check and mate, bezatch.

Do the math, "Hyman". That is, if adding one and one together won't tax your noggin.

Ms. Coulter, in a highly entertaining column, also savages the Times for its NSA reporting, using everything but a taser and a cattle prod. The money quotes:

Jay Rockefeller's public display of CYA behavior is as weak-minded as it is disenguous. Why lock up a circumspect memo, when he could simply register a formal complaint with the Attorney General -- who was fully aware of this particular program? Oh, that's right, because there would be no political hay to be made with a practice the AG had already ruled legal.

And, despite the breathless reporting of the Times regarding the legality of the NSA intercepts, one need only check their archives to find this news report dated November 7, 1982:

Would that the Times could even bother to check their own microfiche.
at 8:31 AM
Email ThisBlogThis!Share to TwitterShare to FacebookShare to Pinterest