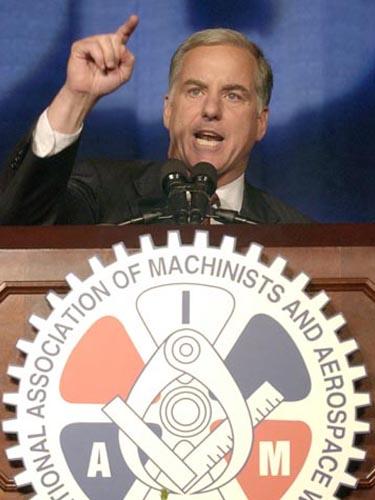 This, my friends, is the ostensible leader of the Democratic Party. And he thinks we're losing a war we're winning. Dean thinks our military is lying when they say we're winning the war on terror in its central front. That he is doing so strictly to score political points -- not because he's correct or it is the right thing for America -- is an outrage. And it is precisely why the Mediacrats can't be allowed anywhere near the levers of power in this country.

Mark Steyn says -- paraphrasing Peter Worthington -- that "'there's no such thing as an unpopular won war.' [But] the Democrat-media alliance are determined to make Iraq an exception to that rule."

Steyn calls them 'the Defeaticrats.' They are indeed, and in more ways than one. They are defeatists in every sense of the word. And they certain to be defeated at the polls in '06 and '08 and in every major election until they have a pro-American agenda worthy of JFK, Truman, or FDR.

After returning from Vietnam, Kerry fabricated stories of atrocities he'd never witnessed. He accused his comrades of committing those atrocities. Today, he's no more witnessed our military terrorize kids (or children, for that matter) in Iraq than I've dated Tyra Banks. But he is freely echoing the Howard Dean, Nancy Pelosi, Ted Kennedy Left Bank of today's Defeaticratic Party. And no one, least of all Bob Schieffer, voices even the slightest concern.

As Iraq turns into another Afghanistan -- another stepping stone on the road to victory in the war on terror -- the Democrats wail and gnash teeth. They accuse our military of terrorizing civilians. They claim defeat when victory is certain.

And that, my friends, is today's Mediacratic, Defeaticratic Party in action. Writing in yesterday's Journal, George Melloan notes:

Shhhh. Just don't tell the Defeaticrats.
at 6:24 AM
Email ThisBlogThis!Share to TwitterShare to FacebookShare to Pinterest