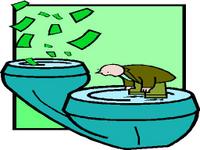 The CTO of BellSouth raised a s**tstorm blogstorm of controversy when Digg picked up his comments that, "an Internet service provider such as his firm should be able, for example, to charge Yahoo Inc. for the opportunity to have its search site load faster than that of Google Inc." In other words, the carrier could decide which content provider gets preferential treatment -- not based on consumer demand or technical need, but on back-room dealings. This would mean the end of "network neutrality" and perhaps incite a war between content providers and ISPs intent on taxing packets.

The Washington Post notes that some view "[p]rioritization [as] just another word for degrading your competitor... If we want to ruin the Internet, we'll turn it into a cable TV system [that carries programming from only those who pay the cable operators for transmission]."

Some of the more noteworthy remarks at Digg include the following:

EduCase picked up one of my earlier articles on network neutrality. If you feel strongly about network neutrality, contact the FCC commissioners and let them know (politely) what you think about telcos trying to tax packets.

at 6:06 AM
Email ThisBlogThis!Share to TwitterShare to FacebookShare to Pinterest