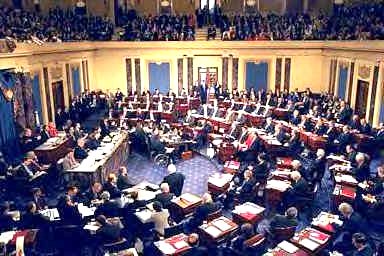 The story goes on to say how W instructed the NSA to start spying on Americans as they made international phone calls or conversed via email with those outside the US.

The author of the story is James Risen, who -- shockingly -- has a book coming out. In about a week. On this very topic.

Can you guess who the book is published by? How about Simon & Schuster, which is owned by Viacom. You may remember Richard Clarke's "scandalous" 2004 book, which was accompanied by a 60 minutes feature. Clarke's ridiculous tome was, of course, another S&S book. Oh, did I forget to mention that Viacom owns CBS too? Talk about an integrated marketing campaign.

So, back to the Times: was a decision to tap into suspect international calls really a super, duper W secret? Apparently not. Jay Rockefeller (D-WV), other congressional representatives, a FISA court, and a judge presiding over the FISA court all knew about and approved the taps.

Interestingly, Risen has no interest in anyone else's involvement. Risen doesn't care about Rockefeller. Or other members of Congress. Or the FISA court. Or the Judge.

This was the product of an independent counsel investigating the Clinton administration's abuse of the IRS in targeting its political foes. An investigation that finished in 2004 but has not been released to the public due to political maneuvering by various Clinton-era officials.

I don't know about you, but I don't recall much interest by the Times in the civil liberties issues raised by this investigation. That is, the Times has plainly ignored the Clinton administration's alleged use of the IRS as a vindictive tool to suppress political targets. And if an administration deploys the IRS to abuse citizens, isn't that an affront to all we hold dear? Isn't that an affront to our civil liberties?

The Times: Selling out National Security to Pitch Books?

Risen's book comes out next week. In the course of its daily efforts, the Times continues to spit out national security secrets like a Pez dispenser, with the express purpose of politically damaging the administration. And, apparently, to sell more books for Viacom.

I can't wait for the investigation of this particular leak. We can compare and contrast the amount of media coverage with that of Plamegate. Of course, the Times' latest blundering efforts truly impact national security. So my guess is we'll see more coverage of the forthcoming Rocky VI movie than any related leak investigation.
at 8:04 AM
Email ThisBlogThis!Share to TwitterShare to FacebookShare to Pinterest