Byrd (Lorie, not Robert) let's 'em have it 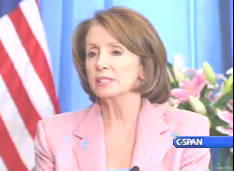 L Lorie Byrd, operating over at Townhall, has a powerful message for the electorate.

The opposition party, faced with exactly the same pre-war intelligence, failed to act. And, after voting to authorize the use of force, they have now decided to re-spin that vote for the purposes of political gain. They've not only withdrawn support, but advocated surrender and -- in turn -- demoralized the electorate and the troops. That's a lesson all of us must recall in '06 and '08 when we consider letting the mediacrats anywhere near the levers of power.
at 5:46 AM
Email ThisBlogThis!Share to TwitterShare to FacebookShare to Pinterest