Remember this hilarious headline from AT&T's newsroom: "AT&T, BellSouth to Merge: Combination Will Speed Innovation, Competition and Convergence"? Ever checked out the spartan, utilitarian simplicity of AT&T's Voice Pricing Guidebook? 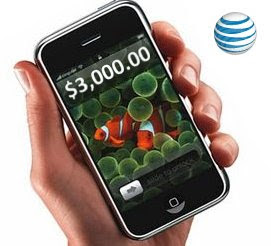 It's no surprise, then, to see word in Boing Boing of some poor schmoe's $3000 monthly bill from AT&T for a quick international jaunt with his iPhone.


Yes, innovation, competition and convergence. That's precisely what I think of when someone mentions AT&T.

p.p.s., Ever wondered what else is in the AT&T and iPhone contractual 'fine print'?
at 8:22 AM
Email ThisBlogThis!Share to TwitterShare to FacebookShare to Pinterest
Labels: FCC, Mobile