Scientists revealed Thursday that a giant hole in the Universe is completely devoid of galaxies, stars, and even dark matter. 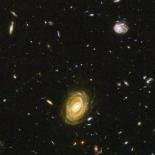 The University of Minnesota team said the 'hole' is almost a billion light-years across and there is no explanation for its presence. "Not only has no one ever found a void this big, but we never even expected to find one this size," said Lawrence Rudnick, an astronomy professor.

When asked what the hole would be called, Rudnick suggested "the core beliefs of Hillary Clinton."
at 8:01 PM
Email ThisBlogThis!Share to TwitterShare to FacebookShare to Pinterest
Labels: Democrats, Hillary, Water-cooler