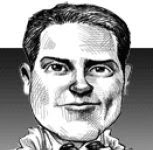 The Politico's Ben Smith has transformed himself into a world-class dissembler with his latest defense of the Clintons in the Hsu affair.

The strange case of Bill Clinton and the Chinese Military

On 9/13/1995, President Clinton met with John Huang and James Riady (pictured below). During the meeting, Huang expressed an interest in becoming a fund-raiser for the Democratic National Committee.

On 3/14/1996, President Clinton signed an order transferring license-granting authority for military/industrial technology from the State Department to the Commerce Department. This order made it easier for the Chinese military (the PLA) to launch American satellites, over objections from the Pentagon and the State Department. During the Clinton administration, focused Chinese espionage efforts made significant headway in the theft of U.S. military/industrial secrets including those concerning nuclear weaponry.

Those are the facts, Ben. Oh, and by the way, if you're so convinced of the Clintons' innocence in these matters, why not demand the full disclosure of the Cox Report and the Barrett Report? The latter is reputed to be chock-full of interesting disclosures and was censored by the Clintons' law firm. But I'm sure it's "nothing conclusive."