In an exquisitely referenced post, Protein Wisdom describes a world of propaganda, sloppy reporting, willful omissions, and flat out lies. In other words, the landscape in which our current mainstream media operates. Don't miss it (hat tip: LGF). 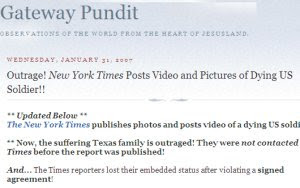 It makes me want to submit a question to the GOP candidates for the Fox debate:

Abraham Lincoln once said, "Whoever can change public opinion, can change the government." Today's mainstream media controls public opinion to a great extent -- and votes with the party of weakness 90% of the time. How, then, can America win any war, no matter how important, when the media is invested in anti-war propaganda and -- ultimately -- defeat?
at 7:14 PM
Email ThisBlogThis!Share to TwitterShare to FacebookShare to Pinterest
Labels: Democrats, MSM, War