The dangerous scourge of 'un-Islamic' barber shops in Iran has finally come to an end. Breitbart reports that over the past 15 days, more than a dozen barber shops that offer "unconventional Western hair styles" have been shuttered. 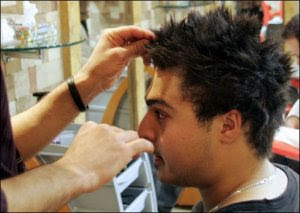 A religious police commander, one Mohammad Ali Najafi, stated that eyebrow-plucking for men and "deviant Western styles" had been banned. In adddition, "eleven women's beauty saloons [sic] were also shut down for... violations such as tattooing, which is banned by a health ministry directive." Long hair, spiked or gelled styles for men have "long angered Iran's religious conservatives."

I'm sure liberals progressives are perfectly fine with Iran's right to restrict dangerous activities such as eyebrow-plucking. After all, you'll never hear a peep from them regarding the mullahs, but let the administration authorize terrorist wiretaps and -- whoo, boy -- watch out for the curse words!
at 7:50 PM
Email ThisBlogThis!Share to TwitterShare to FacebookShare to Pinterest
Labels: Democrats, extremism