* Democrats harshly criticize the president for not adhering to all of the recommendations of the 9/11 Commission.

* In the largest restructuring of the government since World War II, the President creates the Department of Homeland Security to better coordinate the protection and response capabilities of the Federal government.

* The DHS announces its decision to use spy satellites to examine ports and critical infrastructure from space to identify vulnerabilities. To address civil liberties concerns, the head of intel operations for DHS has ordered a team of lawyers to review requests for access or use of the system.

* Predictably, liberal blogs explode in outrage. Prediction: within 48 hours, a cadre of elite Democratic leaders (Clinton, Obama, Pelosi, and Reid, for instance) will pillory the administration for violating civil liberties. And the ACLU will blow a gasket rushing a brief to a like-minded judge such as Anna "Instant Appeal" Taylor. 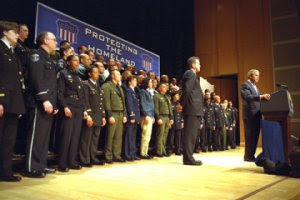 So, to recap, Democrats played politics after 9/11 by slamming the President for carefully implementing the recommendations of the 9/11 Commission. Bush then implements the guidance of the bi-partisan commission, which includes securing US ports and infrastructure via the country's satellites. Democrats, playing partisan politics again, pretend that they weren't in favor of the commission's recommendations and hammer Bush again.

When it comes to the Oscar award for hypocrisy, Democrats are a lock to win for the 120th time in the last 124 years.
at 7:23 PM
Email ThisBlogThis!Share to TwitterShare to FacebookShare to Pinterest
Labels: Democrats, extremism, War