Hillary Clinton told the Boston Globe today, "I have a million ideas. The country can't afford them all." 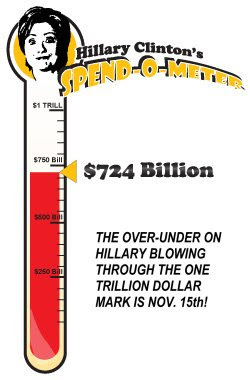 It must have been a Freudian slip. Hillary Clinton is on a roll, introducing new plans to spend your money by expanding government... just about every day. Truth be told, she's invented so many big-government agencies over the last two weeks alone that it's getting hard to keep track. That's why the Hillary Clinton Spend-O-Meter was introduced -- it's the quickest way to see how Hillary will affect your already over-taxed wallet.

Every time Hillary proposes a new "solution", the Spend-o-meter will be updated to reflect a realistic estimate of the spending required to fund it. The current picture reflects $440 billion for her plan to have the government take over health care (a low estimate, guaranteed); $100 billion for her taxpayer-funded retirement program; $6 billion for government-funded transportation; and much more.

In fact, today, on the Spend-o-meter's first day, it is already registering $724 billion.  And it's still a year before Election Day.  Can she hit $1 trillion before Thanksgiving?  Will she make it to the $2 trillion mark before the party conventions next summer?  Visit Clintonspendometer.com to see how much of your hard-earned money Hillary Clinton is promising to spend, as she says, "on behalf of the common good."

"Common good"... Sounds kinda... Communistic to me. If she's elected, I wonder where the Gulags will be located.
at 7:05 PM
Email ThisBlogThis!Share to TwitterShare to FacebookShare to Pinterest
Labels: Democrats, Economy, Hillary