And the Oscar Winner for Best Science Fiction Film is... 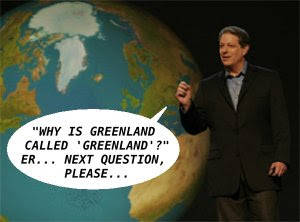 The Science & Public Policy Institute has published a position paper by Christopher Monckton. Its title -- 35 Inconvenient Truths, The errors in Al Gore’s movie -- is sending chills down the spines of global warming alarmists who were poised to profit from hysterical public policy responses to climate change.

A spokesman for Al Gore has issued a questionable response to the news that in October 2007 the High Court in London had identified nine “errors” in his movie An Inconvenient Truth. The judge had stated that, if the UK Government had not agreed to send to every secondary school in England a corrected guidance note making clear the mainstream scientific position on these nine “errors”, he would have [ruled that the] distribution of the film... had been an unlawful contravention of an Act of Parliament prohibiting the political indoctrination of children. Al Gore’s spokesman and “environment advisor,” Ms. Kalee Kreider, begins by saying that the film presented “thousands and thousands of facts.” It did not: just 2,000 “facts” in 93 minutes would have been one fact every three seconds. The film contained only a few dozen points, most of which will be seen to have been substantially inaccurate. The judge concentrated only on nine points which even the UK Government, to which Gore is a climate-change advisor, had to admit did not represent mainstream scientific opinion...

Read it all and pass it on. As more and more citizens find out about the "UN's IPCC Global Warming Bunko Scam," you'll see the climate change frauds running for the exits.