In a sure sign that the apocalypse is near, IowaHawk opened up comments on his post looking for the best 30-second Martha Coakley commercials. You'd be hard-pressed to tell the difference between them and Coakley's real attack ad -- which sets new standards for sleaziness -- illustrated below. 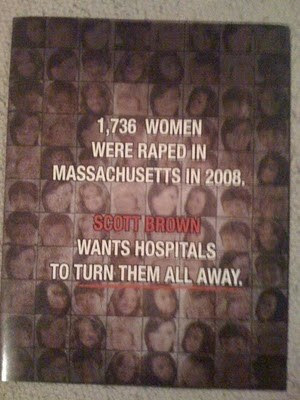 WOMAN
Just look at the record, Ted. From James Byrd to Matthew Shepard to the last scene in Easy Rider, pickup trucks are the official vehicles of Southern Republican lynch mobs. So are you still voting for Scott Brown?

[Sound of dolphins and laughing children]

V/O: If you are like most people, you love baby dolphins.

V/O: After all, what kind of demonic, kitten-eating freak doesn't love baby dolphins?

[Sound of maniacal laughing and chainsaws]

V/O: Remember, every time someone votes for Scott Brown, a baby dolphin dies.

He pulls into the parking lot of a huge glass mega church. Every vehicle is festooned with “It’s a Child, Not a Choice.” bumper stickers and gun-racks.

[Music changes to the Darth Vader/Empire Theme from Star Wars]

Cut to inside where thousands of beefy-faced white people with over-sprayed hair wave their arms in the air and sway back and forth while images of aborted fetuses and gay weddings flash onto two giant screens. The singing turns to chanting;;Scott Brown….Scott-Brown. Intensity grows until a huge set of double doors bursts open and Scott Brown, now attired in a gleaming blue suit, his intact teeth sparkling, appears as if a vision, with haloes of klieg-lights behind him. The crowd roars, Cameras cut to faces in the crowd: a military man in uniform, his congenital inability to qualify for a real job evident in his vacant, brutal face. A hugely pregnant woman with big hair in a calico dress, her 9 disturbingly immaculate children lined up at her side. A fat old man with an NRA ball-cap on his head. The chants swell in volume and ferocity as Scott Brown runs down the aisle.

Cut to Massachusetts. A mob of unwashed and unlettered southerners and Midwesterners tosses books onto a bonfire outside the Harvard Coop. Men in “Tea Bagger” shirts roll oil drums labeled “Toxic Waste” to the shore and disgorge their contents into Boston Harbor and the Charles. Big-haired women wearing cross necklaces and matching polyester separates drag women off the sidewalks of Wellesley for forced leg and underarm shaving. Bible-brandishing goons storm the bar at The Country Club and snatch the martinis out of the flaccid fingers of sobbing RINOs. Andrew Sullivan wanders, half-clothed and weeping in the smoldering ruins of P-town.

Graphic: Vote for Martha Coakley: Before it is TOO LATE. Drumroll. Silence. Gun shots. A scream.

Kevin Jennings: Our children are not safe with Scott Brown.

Nancy Pelosi: Scott Brown is wealthy. He associates with wealthy people.He is very partisan and doesn't work well with others.

Janet Napolitano: Scott Brown refuses to recognize the threat of terrorism posed by our retired veterans.

Sheila Black: Look! I just found an honest-to-goodness REAL DOCTOR who opposes Scott Brown!(ring ring ring!) hold on! I gotta get this.....

Barack Obama: Let me be perfectly clear! Scott Brown is totally inexperienced and unfit for this important job. He doesn't have a clue!

[SCENE: Two moms are having coffee in the kitchen, keeping an eye on their kids playing in the back yard]

Jane: Say, Peg, can you believe that election? I never thought good old Ted Kennedy's Senate seat would go to a Republican!

Peg: Tell me about it! Especially considering how much that Scott Brown hates women. Can you believe that he sponsored an amendment that would force our daughters to get their taxpayer-funded contraceptives at a hospital that didn't have religous objections? Talk about inconvenient!

Jane: I'm pretty sure that's how it was in Nazi Germany, too.

Peg: And the worst part is, those pesky reporters are able to ask questions of politicians all day long, without getting knocked to the ground!

Jane: Thomas Jefferson must be rolling in his grave.

Peg: Still, he's just one vote out of a hundred. It can't be all that bad... [looks concerned] can it?

[Camera pans to window, transitions to kids playing in yard. Eight-year-old girl kneels down to pluck daisy and sniff it. Switch focus to long-range as mushroom cloud erupts in distance.]

Voiceover: Vote Coakley. Or else.

Mom : Hey sweetie, why you crying?
10 year old Susie : Mom, I just heard Scott Brown is trying to kill me. Is that right?
Mom : Of course not Susie, Scott Brown is not trying to kill you, he's trying to kill all children,
Susie : But, but, why?
Mom : Cuz that's what Republicans do, they kill children, and kittens, but mostly children.
Susie : But...how?
Mom : By killing Uncle Teddy's health-care bill, that's how. Their pro-cancer, anti-kitten agenda has finally been exposed. They're even planning to put cancer in the drinking water.
Susie : Didn't Uncle Teddy die of brain cancer?
Mom : Infected with brain cancer, Susie. Infected with brain cancer by Republicans.
Susie : I'm scared.
Mom : Don't be scared Susie. If Scott Brown is elected, your father and I will take care of you, if you know what I mean.
Susie : The Kopechne treatment?
Mom : Of course.
Voice Over : Don't make parents in Massachusettes kill their children. Don't make pet owners in Massachusettes kill their kittens. Vote for the pro-child, pro-kitten candidate. Vote for Martha Coakley.

PAN TO POLICE CARS ON DARKENED STREET WITH LIGHTS FLASHING

Narrator: "Is it true he visited Thailand to engage in illicit activities with underage cheerleaders?"

PAN TO MAP OF THAILAND WITH THONG UNDERWEAR LYING ON IT

Narrator: "Did Scott Brown really murder his first wife in a fit of rage?"

Narrator: "Could you cast a vote for an accused murderer, child sex addict and batterer of the elderly?"

PAN TO SMILING COAKLEY IN COLOR

Narrator: "Say no to alleged criminal behavior: it's time for Martha Coakley."

Rapid V/O: This message paid for by ACORN.

at 6:57 PM
Email ThisBlogThis!Share to TwitterShare to FacebookShare to Pinterest
Labels: Democrats, Obama

Okay, I don't usually leave comments but I have to say I am laughing so hard I can't stop! WONDERFUL parody!