Carrier and the Slippery Slope


“Companies are not going to leave the United States anymore without consequences.” – Donald Trump

The reaction to Trump’s deal to keep 1,100 Carrier jobs in Indiana has ranged from outrage to adoration. There are so many layers to this Shakespearean drama that all points of views have some level of credence. I’m torn between the positive and negative aspects of this deal. If you’ve read Bastiat’s The Law and Hazlitt’s Economics in One Lesson, you understand the fallacies involved when government interferes in the free market. Politicians and their fanboys always concentrate on the seen aspects of government intervention, but purposely ignore the unseen consequences.

First, I wholeheartedly agree with Scott Adams’ assessment of Trump’s move as a brilliant, visible, memorable, newsworthy ploy to sway public opinion and sending a message to corporate America that he means business. Trump beat Carrier like a rented mule during the entire presidential campaign for announcing they were closing their plant in Indiana and moving the jobs to a new plant in Mexico. The publicity was so bad, I ended up getting a substantial rebate when I had a Carrier air conditioner installed in the Spring. 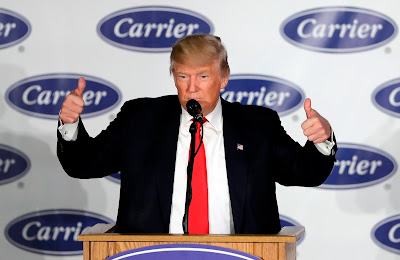 I’ve seen Trump worshipers trying to show what a fantastic economic deal this was for Indiana and the country. They are only looking at the scenario of staying versus leaving. The other scenario is what exists today versus what will exist tomorrow. Those 1,100 jobs already exist in Indiana. They are already paying taxes and spending money in Indiana. The taxpayers of Indiana currently have no obligation to Carrier or the employees of Carrier. With this new “fantastic” deal, the employees of Carrier are still employed, but now the the taxpayers of Indiana now have a $7 million obligation to Carrier.

This isn’t a zero sum game. The $7 million is taken from the pockets of taxpayers and will not be spent in the greater economy of Indiana. This deal is absolutely a net loss for Indiana versus where they were before the deal. The people of this country are hypocritical when it comes to keeping jobs in the U.S. They want cheap electronics, gadgets, appliances and air conditioners. Therefore, they have been buying cheap foreign made products by the trillions for the last couple decades.

It is true that if Carrier had sent those jobs to Mexico, there would be a short-term negative economic impact on Indiana. The 1,100 people would have lost their jobs and would have utilized unemployment and probably food stamp benefits. Eventually, most of these people would have obtained employment elsewhere – some at lower paying jobs, some at higher paying jobs. Indiana has an unemployment rate of 4.4%, so there are jobs out there. Another company might be able to buy the existing Carrier plant for a great price, start a new production plant, and hire new employees. This is the unseen part of the picture.

The real issue here is why Carrier and thousands of other corporations feel the need to move operations out of this country. Since the passage of NAFTA in 1994 and China’s decision to provide slave labor to foreign corporations around the same time frame, American conglomerates have embraced the “benefits” of globalization:

Many, if not most, of those voting for Donald Trump want less government in their lives. Trump railed against corruption, government favoritism, crony capitalism, and special deals. For the last eight years we’ve witnessed Obama favor green energy frauds like Solyndra, use taxpayer funds to save union jobs at GM and Chrysler, provide tax breaks to wealthy buyers of Tesla luxury cars, purposely destroy the coal industry, and not prosecute one Wall Street criminal banker. This Carrier deal is just a different version of the government carrot and stick game used by every president.

This high profile deal is a symbolic message to Trump voters and American corporations, but it can’t become the standard operating procedure for his presidency. Government picking winners and losers, aligning with particular companies or industries, or attempting to manage the economy is nothing but an expansion of the corporate fascism we’ve been experiencing for decades. Trump needs to create an economic climate which will convince American companies to expand, invest, and hire more workers. He has already documented what really needs to be done:

Donald Trump is successfully winning the public relations aspects of his new job, even before assuming power. I think he understands the bigger picture of what needs to be done to revive our stagnant, over-taxed, over-regulated, and government suppressed economy. Tax simplification, reducing the size of the Federal government, getting the Feds out of education, not policing the world, and cutting Federal spending would provide some of the resources to implement tax cuts and deal with Obamacare repeal.

Trump continues to infuriate ultra-liberals like Larry Summers and Paul Krugman with his wheeling and dealing, even before ascending to the presidency. Lame duck Obama looks even more lame, as Trump engineers deals as a private citizen benefiting the country. Time will tell whether this Carrier deal was just a symbolic line in the sand, or whether it is a sign of future government interventionist policies which will ultimately backfire. In the long run, the less government, the better.

“Practically all government attempts to redistribute wealth and income tend to smother productive incentives and lead toward general impoverishment. It is the proper sphere of government to create and enforce a framework of law that prohibits force and fraud. But it must refrain from specific economic interventions. Government’s main economic function is to encourage and preserve a free market. When Alexander the Great visited the philosopher Diogenes and asked whether he could do anything for him, Diogenes is said to have replied: “Yes, stand a little less between me and the sun.” It is what every citizen is entitled to ask of his government.”― Henry Hazlitt

Carrier is just the first: Trump intends to do this for EVERYONE by lowering corporate taxes and encouraging them to come back to the United States and create jobs here. What the hell did you think he was talking about during his campaign? Carrier is merely the first beneficiary.

Anon - there is a world of difference between making changes conducive to keeping businesses here in America - lower taxes, reducing the insane regulatory climate, and repealing Obamacare for starters - and _threatening_ companies that want to move their business off-shore. If Trump follows through on those threats, he is no better than any of the other political scum running our government.

As a businessman himself, I hope he falls back on making America a good place to start and/or run a business and drops any idea of trying to force companies to stay.

Depends on the company. If it is moving, more to support globalism than anything else, then I hope you does go after them. We ARE at war. If America loses the one bright star that might mean something will go out. The light is pretty dim at this point, and at great risk. So... it really depends on the company, their reasoning and alliances, and what it really means.

Carrier equipment is needlessly complex and tedious to repair. Maybe Mr. T should have let this one go.