DEATH SPIRAL: Are you living in a state poised for economic collapse?

Being on the hook is not going to be pretty when interest rates are raised back up, and debts come due. At a personal level, it will mean more stress and juggling to make ends meet. For the larger economy, it will mean cities and states unable to meet obligations or balance their budgets – ending in bankruptcy, and bailouts. Meanwhile, millions of people are relying on that money to keep coming in order to survive. Something is going to go very wrong.

Relying upon government to function and send you money is not a secure plan.

The mathematics are terrifying and dismal, and so is being caught up in these collapsing states.

In the next phase of the financial crisis, the debt supercycle will become the most defining feature of the big hurt that will fall on nearly everyone.

That’s the dire warning that Goldman Sachs issued about what they termed the Third Wave of the global collapse. But it hasn’t come, at least not yet:

This wave is characterised by rock-bottom commodities prices, stalling growth in China and other emerging-markets economies, and low global inflation, Goldman Sachs analysts led by Peter Oppenheimer said in a big-picture note.

This triple whammy has its roots in the response to the first two waves of crisis — the banking collapse and European sovereign-debt crisis — and it is all part of the so-called debt supercycle of the past few decades.

Unfunded liabilities for pensions and other state benefits are threatening the security and future of an entire generation of retiring, hardworking Americans.

The debt will be shifted for as long as possible… but eventually, someone will have to come to terms with it. The black hole totals up to huge sums of money; no one can pay; and the system is bankrupted, or services rendered become inadequate and farcical.

Forbes contributor William Baldwin describes the acute problem of “death spiral states,” which could actually be as bad as it sounds. It affects dozens of cities and municipalities as well.

Does your state have more takers than makers? Check it out.

Add up the numbers. There are 114 clients drawing from the government for every 100 people chipping in by working outside the government and paying taxes. We’re calling this the Feedme Ratio. Six states have a number over 100.

These states are at risk of going into a downward spiral in the next recession. The burdens will remain but too many of the providers—employers in the private sector—might shrink or decamp.

Right now, the biggest risks for a bankruptcy or collapse is in the these states, based upon the ratio between what Baldwin terms “makers” and “takers.” Basically, the socialist state is enveloping all prosperity:

Detroit and Chicago top the lists of cities who wouldn’t be healthy in the ratio of makers/takers either, and would crumble in a debt crunch.

You can check on your state via this interactive map, though it is dated slightly to 2015.

A score under 100 means that the state has a net number of providers, and is theoretically on more solid ground. However, the pressures are endemic in the system, and no state is immune. For instance, Texas has a healthy score of 66.7; yet, the city of Dallas just announced that it is suspending pensions payments to city rescue workers and employees. There’s a serious disconnect.

Once things go downhill, violence, crime, looting, riots and the like become chronic problems. The police state presence is also an issue, and society goes on edge.

Everyone can feel the sinking depths, and order is about to implode. When things go primal, you do not want to be around to get caught up in it.

Being inside a major city on the day that the ATMs stop spitting out cash, or EBT cards don’t work will be an incredibly dangerous day. Relying upon government bureaucracy and functioning technology to meet your vital needs is never a good position to be in during an emergency situation – be it economic crisis, hurricane, power grid failure or something else.

Joel Skousen described in great detail how to avoid the urban areas that will become completely dysfunctional nightmares at the first sign of a major emergency.

Your retreat should be strategically chosen to lay outside of certain regions, military targets and fragile climates. Knowledge of the back roads is essential to planning a route that won’t leave you stranded on the highway in endless gridlock.

Above all, it is advisable to avoid mass populated areas, especially big cities on the East and West Coast. People that are prone to panic, and will be easily cut off from essential services become desperate. There are far too many bad apples in that ratio for any good to result.

Avoidance is key – and that is why living in a “death spiral” state like California or New York could be a major liability during a crisis, or alternately a prolonged collapse.

CalPers pension… a massive black hole that is merely carving a path for many failed states to come.

The future is austere if this equation isn’t balanced out: 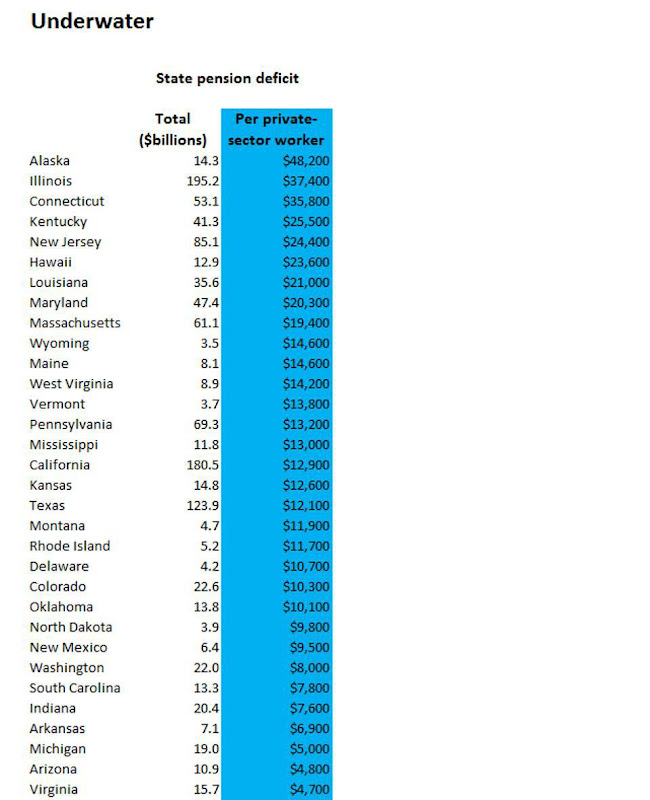 Tom Chatham warns about the abrupt change that is coming home to roost in America. Things can get really bad, really quick.

But really, most of us don’t know how bad it will get:

Americans that have only known the post WWII prosperity are ill equipped and educated to deal with depression level living. Easy credit and instant gratification have created a nation of whining, self absorbed, entitlement minded people with no moral or mental toughness.

Doug Casey believes we are headed for what he calls a super depression created by the ending of a debt super cycle. The bigger the debt cycle the bigger the depression that follows. That’s how reality works and most people are not prepared for reality.

When this depression, which has already started, gets momentum, it will overwhelm the plans of a society that is expecting to get things like social security, pensions and payouts from retirement plans they have paid into for many years. All of those things will disappear almost overnight and leave society gasping and stupefied over what to do.

The big reveal is coming: inside that great big old lock box… is just another I.O.U.

Are you prepared for the future, and all the economic uncertainty it could bring?