Washington Post Suddenly Concerned About A Divisive Tone From The President


No, not the one who’s been in office for almost 8 years. Nor the one who seems to be involved in actual events. No, this one, as posed in the “news” section by Philip Rucker and John Wagner:

He strode out on a catwalk at a football stadium here to Lynyrd Skynyrd’s “Sweet Home Alabama.” A 50-foot cedar tree, which aides installed behind his stage with a crane, was decorated with Christmas ornaments larger than human heads. His crowd, thousands deep, held up familiar signs (“Make America Great Again”) and reprised signature chants (“Lock her up!”).

“This is where it all began,” President-elect Donald Trump exhorted, basking in the adulation of the Alabamians who had come to see him Saturday afternoon in the same stadium where 16 months earlier he staged the first electric mega-rally of his improbable campaign. (snip)

Rather than projecting inclusiveness and striving to heal the wounds from the bitter election, as past presidents-elect have done, Trump has traveled on his “USA Thank You Tour” only to states he turned red on election night. He has whipped up his massive crowds, and they in turn have displayed their allegiance — a powerful reminder to members of Congress that it could be politically dangerous to cross him. (snip)

As Trump assembles his administration and prepares to govern, he has continued the divisive rhetoric and showmanship of his campaign. He has mocked his opponents, sneered at the media and trumpeted his electoral feats. To the nearly 54 percent of voters who cast ballots for someone else, Trump’s message has been, in short: Get on board or get left behind.

Now, they do have a point. Trump could certainly work to heal some divisions and should certainly be taking less shots, really, no shots, at individuals and groups who disagree with him. This is antithetical to the system whereby citizens should be subject to reprisals from elected officials, as laid out in the 1st Amendment. It’s below the station of President, and even President-elect. 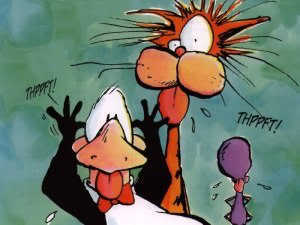 That said, where was the concern over the last almost 8 years over Obama’s divisiveness? Obama consistently picked fights with Congressional Republicans, using language that not only smeared and insulted them, but did the same to Citizens who vote Republican. He’s insulted directly or had his surrogates insult numerous citizens and groups. He’s insulted the Supreme Court.

He’s called American’s lazy more than once, and done it while overseas. He’s called us soft (though, let’s be honest, people who vote Democrat very much seem to be soft). He called one police department stupid. He’s called others racist. Insults to those who opposed Obamacare. The NRA and those who support it. Gun owners in general.

He’s attacked private citizens and groups both domestic and abroad. He’s insulted other countries. Heck, I have a giant list (which hasn’t been updated this term, because, really, this is what he does) of all the people, places, and things which have been insulted or met his big bus.

Obama has done almost nothing to bring people together. But, of course, in the Age Of Trump, the tenor of the media will be totally different. What they don’t get, though, is that they were on the ballot. I scoffed at this notion from Trumpites numerous times, but, they were correct. And the media lost. Citizens know it. And will judge the media accordingly as the pull their anti-Republican and anti-Trump schtick.

Interestingly, at the end of the article, after so many have moved on to new stories, we learn:

At the end of his speeches — after the teasing and taunting, after the Christmas greetings, after the cries in the crowd to jail Clinton — Trump has looked ahead to life as the president and tried to cast himself as a unifying figure.

His crowds may have been the white voters of red America, but the president-elect has declared, as he did Thursday night in Hershey, Pa., that his message is for Americans “from all parties, all beliefs, all walks of life.”

“Whether you are African American, Hispanic American or Asian American or whatever the hell you are, remember that we are all Americans and we are all united by one shared destiny,” Trump said. “So I’m asking everyone to join this incredible movement.”

Huh. That’s more than Obama ever did.