The walls must be closing in on New York Mayor Bill de Blasio (D-NY). Out of the five(!) separate investigations into de Blasio and the shakedown operation masquerading as an administration he runs, two have moved forward to the extremely serious step of presenting evidence to a grand jury. The two criminal grand juries, one federal and one state, represent, the “strongest indication” yet that criminal charges are forthcoming, according to the New York Times, which broke the story:

“It was unclear whether either inquiry would result in criminal charges against the mayor, but the grand jury activity appeared to be the strongest indication since the investigations came to light in April that prosecutors may be moving closer to one or more indictments, possibly against some of Mr. de Blasio’s closest aides.”

Even more worrying for de Blasio the two grand juries have “centered on Mr. de Blasio, a Democrat, and several of his senior aides,” including his “top political aide” Emma Wolfe and his finance director Ross Offinger. 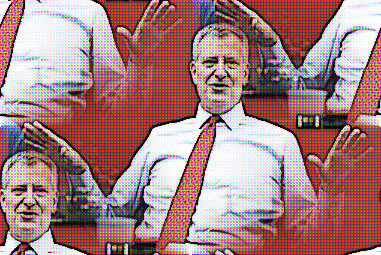 The state investigation, run by the Manhattan district attorney, is looking into the mayor and his team for possible violations of state election laws:

“The state investigation has focused on whether the mayor, or those acting with him or on his behalf, violated state election law by raising hundreds of thousands of dollars through three upstate county committees and funneling it to Democratic candidates during the party’s unsuccessful 2014 bid to gain control of the State Senate.”

The federal investigation, run by the office of the United States attorney for the Southern District of New York and the FBI, is examining de Blasio and his administration’s actions for possible pay-to-play violations:

“The federal investigation has examined whether Mr. de Blasio or his aides took beneficial action on behalf of donors in exchange for contributions they had made to his 2013 mayoral campaign, his political nonprofit or both in roughly a half-dozen instances, according to people with knowledge of that inquiry.”

In a development that has to be worrying for Hizzoner and his staff, federal investigators have already secured the cooperation of witness who did business with the city and donated to de Blasio’s campaign. Even more troubling for de Blasio, this witness has already been indicted on unrelated charges, perhaps raises the chances that he’d flip on any illegal activities.

No matter which way you slice it, de Blasio is facing the biggest crisis of his political career. New York City’s mayor started 2016 trying to play Bernie Sanders off Hillary Clinton for his political benefit, and he’s ending it with the U.S. Attorney and the Manhattan D.A. racing each other over who can indict someone faster. De Blasio better get in all the helicopter hours while he still can!

WOW - It's almost like the new York times wants to get into the business of journalism!

The only thing worse than Mayor DeBlasio would be a Mayor Bo Deatl.

I'm thinking his crime wasn't crime, according to the NYT's, it was not picking the winning losing side, that of shrillary. You don't play sides against sides when dealing with the mob, political or business. He will be made an example. His crimes are NY business as usual, it's that sides splitting thing that'll get him gutted. I'm enjoying it in any case.