In some areas, such as Chicago, Detroit, Baltimore, California, New Jerse and New York, there are are draconian gun restrictions. Heavily burdensome. Yet, interestingly, there are a lot of crimes that occur there that involve the use of guns. But, hey, CNN:

You don’t need a permit or license to buy a gun in Florida. (And you don’t have to register your gun either)

The shooting at Marjory Stoneman Douglas High School in Parkland, Florida, which killed 17 people, has put the focus on Florida’s gun laws. For instance, the state doesn’t require a permit or a license for someone to own a gun.

Here are some facts about the gun laws in the Sunshine State, from the Giffords Law Center to Prevent Gun Violence and the National Rifle Association’s Institute for Legislative Action: 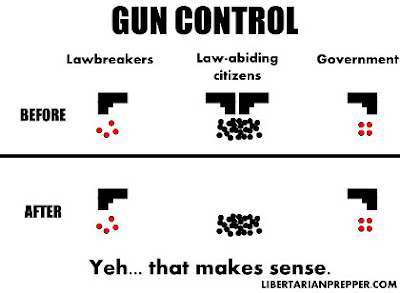 The permit/license thing is a canard. It doesn’t matter if you have one, as you’ve gone through a federal background check to be able to purchase the firearm. My handgun is not registered with the state of North Carolina nor with Wake County. Only one county in NC requires registration, being the heavily Democratic run Durham County (which has lots of “gun crime” in the main city of Durham). This is all fear-mongering and misrepresentation.

The Giffords Law Center, a gun-control advocacy group that tracks firearms legislation, gave Florida an “F” grade for its gun laws in 2016. The law center says Florida has 12 gun deaths per 100,000, the 25th-highest rate in the nation.

Florida also has the “stand your ground” law, which the NRA’s Institute for Legislative Action describes as a person having no “duty to retreat” if they’re attacked in a place where they have a legal right to be.

ZOMG, you can actually protect yourself? How rude!


So making guns ILLEGAL will take them OFF the Street ???
..
Then we should make Heroin and Meth ILLEGAL TOO !!
..
While we are at it we might as well make Murder ILLEGAL as well .....

I love how the Democrat propaganda machine is so adamant about banning something they know nothing about.

The 25th highest rate among 50 states. Wow, exactly middle of the road.