BALTIMORE: Who Is To Blame?

I’ve seen the liberal, lying media pondering how we could allow the riots, looting, burning and lawlessness to happen, as if it is our collective fault. Obama stands before his teleprompter and pontificates about the need for us to end the poverty that supposedly led to Purge Night in Charm City. That term cracks me up. The city has so much charm, its football team once snuck out of town overnight and headed to Indianapolis. It has so much charm its baseball team was forced to play a game with no fans in the stands. 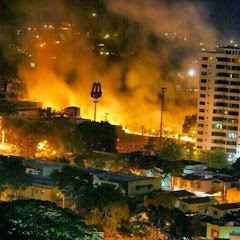 I think most people can agree that Freddie Gray, a petty drug dealer, was killed in police custody for the crime of looking suspicious. The policemen who killed him deserve to go to jail for murder. As usual, the powers that be circled the wagons and intended to exonerate the hero first responders. The people of Baltimore had a right to be pissed. They had a right to protest. They didn’t have a right to burn businesses and cars. They didn’t have the right to riot, loot, and injure others.

It is the police department created and controlled for decades by Democratic progressive politicians that has committed the atrocities against the people who have been electing these progressives year after year. Baltimore has a corrupt, reckless, out of control police department enabled by a crooked and incompetent Baltimore politicians. The rap sheet for Baltimore’s finest is long:

The cries of racism and white oppression ring hollow. It’s a tired storyline. Facts are always inconvenient to race baiters with an agenda to extract more money from whites with a guilty conscience and the inability or unwillingness to speak the truth. Let’s examine some facts about good old Charm City, USA. 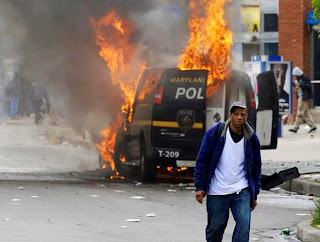 It doesn’t take a village to raze, burn, and loot a village. It just takes 50 years of liberal economic and social policies. Of course the liberal media, liberal politicians, and liberal voters don’t think anyone should be blamed for the disaster that Baltimore and every other Democrat controlled urban shithole (Detroit, Philadelphia, St. Louis, Atlanta, Cleveland) have become over the last 50 years. Community organizer Adam Jackson, living up to the standards of Organizer in Chief Obama, declared that in Baltimore “the Democrats and the Republicans have both failed.” At least progressive community organizers have a sense of humor. How can Republicans have failed if the mayors and City Council have been 100% Democrat since the mid 1960s? I wonder how many Republicans were among the youths burning, looting, and destroying the city this week.

No Republican, and definitely no conservative, is responsible for the poverty, crime, educational failure, and disintegration of this lesson in Democratic rule. Baltimore’s police department is the product of the progressive wing of the Democratic party, enabled by black identity politics. This is entirely a left-wing Democratic creation. They get all the credit for what Baltimore has become. The mayor of Baltimore is an incompetent bumbling fool. These corrupt, arrogant left wing boobs are incapable of running a school system, police department, or economy.

They know how to play race politics to get elected. They know how to increase taxes on the few remaining producers in order to redistribute it to their black voters. They know how to destroy businesses and jobs. They know how to create a welfare mindset among black people, enslaving them in poverty, dependency, and ignorance. Blacks have suffered the most from Democratic black rule. These riots will result in less businesses, less jobs and less taxes for the city. Blacks will be hurt the most, but they will continue to vote for Democrats. Insanity is doing the same thing over and over and expecting a different result. Believing liberal welfare policies will fix the problems created by liberal welfare policies is insane. Liberalism is a disease of the brain and has infected a vast swath of America, especially in urban enclaves across the land.

Baltimore and every other Democrat controlled urban enclave in America are destined for decline, destruction, and civic decay. Baltimore cannot be fixed by spending more money on welfare programs. The country has spent $22 trillion on anti-poverty programs since LBJ declared his war on poverty. They haven’t moved the dial on poverty one iota. They have created generations of dependent black people, trapped in urban ghettos like Baltimore. If you can’t educate children for $15,700 per year, then you won’t educate them any better for $18,000 per year. Liberals will never admit their policies, programs, and corrupt practices created this national disaster.

Liberal welfare policies have encouraged and rewarded out of wedlock births. The 72% black out of wedlock birth rate is the single biggest cause of Baltimore’s long-term decline. Children without fathers are destined to be uneducated, unemployed, and underachieving. Children raised by married working parents who provide good role models are not on the streets. They are studying. They are not looting, killing, robbing or having kids when they are teenagers. There are no guarantees in life, but being stupid, lazy and ignorant guarantees a life of poverty. Liberal welfare policies pay these people to have more kids out of wedlock in order to maximize their welfare payments. There have now been three generations of black people entrapped by these demented welfare programs.

There is no will among the recipients or distributors of race based welfare payments to change their policies or programs. Therefore, every time a white cop kills a black person or a white store owner kills a black thief in Baltimore or any urban ghetto, the potential for riots, looting, and burning of businesses will rear its ugly head. The only guarantee is the liberals running the urban ghetto will not accept blame for what they have wrought. Farewell to the America of personal responsibility, work ethic, marriage, family, and valuing education.

The esteemed mayor of Baltimore Stephanie Rawlings-Blake (of course a liberal black woman must hyphenate her name) summed up the disease of liberalism after her peeps had destroyed their neighborhoods the night before:

“It’s a very delicate balancing act, because while we tried to make sure that they were protected from the cars and the other things that were going on, we also gave those who wished to destroy space to do that as well.”

You reap what you sow America.

"I think most people can agree that Freddie Gray, a petty drug dealer, was killed in police custody for the crime of looking suspicious. The policemen who killed him deserve to go to jail for murder."

No, most people can't agree with what you are implying; that Freddie Gray was murdered by Baltimore police officers. Most people, at least those that support our judicial system, would agree that these police officers deserve their day in court and that they are innocent until proven guilty.

Anyone that wants to slam our American police officers need to work just one shift in neighborhoods like the one where Freddie Gray was arrested. Work there a month and tell us how you came out of it not jaded and disappointed in society. So while you're trying to show that cities like Baltimore, and St. Louis, and Chicago and Detroit are such failures due to Democratic Party policies, don't automatically assume that the six police officers that have been charged over Freddie Gray's death are guilty until proven innocent.

I agree entirely with Anonymous. Freddie seemed to be in a normal state of health when he went into the police van, reportedly continued in that state during several stops the van made when he was observed by the police, but was in extremis when the van arrived at the police department.

The facts, such as may be ascertained. will have to be evaluated by a jury and a verdict declared. Until then, the police defendants are to be presumed innocent.

Whatever transgressions may have been committed in the past by the police in Baltimore are entirely irrelevant to the present case.

Not irrelevant, however, is how Freddie Gray behaved during previous arrests. Chances are that he was behaving in character when he was arrested in the instant occasion.

I am not an attorney but believe that the police defendants will be exonerated, assuming that a change of venue is granted. If it is not granted, an appeal will exonerate them. Civil charges may stand.

Check out this one:
Example #8 Thirteen female corrections officers essentially handed over control of a Baltimore jail to gang leaders, prosecutors said. The officers were charged Tuesday in a federal racketeering indictment. The indictment described a jailhouse seemingly out of control. Four corrections officers became pregnant by one inmate. Two of them got tattoos of the inmate’s first name, Tavon — one on her neck, the other on a wrist.

What understanding that can be gained, in addition to the above, from a sythesis of two WaPo stories, is that Freddie was NOT in the best of health. He had unusually high levels of lead in his blood, as do many who were raised in tumble-down tenements in urban ghettos. Remember the lead paint ads from the 70's? Freddie is the poster boy for that.

Medical records show a 7-times higher than CDC rate of lead when he was nearly two. Injesting lead paint chips can cause brain and nerve damage, stunt growth, and cause cognitive, digestive and bone density problems well into adulthood.

In other words, Freddie was fracture-prone. Did the cops know that? Not likely. Did Freddie overdo his attempt to appear brutalized? Possibly. If this is revealed, let alone considered, it will be beyond surprising.

It doesn't fit the narrative.

First two commenters: with all due respect, I have family members who served in LE. The point of the post is that Democrat governance and police leadership are complicit in the fate of Baltimore.

Where is the ambiguity in this statement "The policemen who killed him deserve to go to jail for murder."

If that is not what was meant, then perhaps the author should have been clearer in his remarks. Our society is based on the premise that people are innocent until proven guilty, not the other way around. And the examples of less five +- bad actors in a PD that employs over 3,200 people is hardly an example of the norm. Why make such an affirmative statement that the six charged BPD officers deserve to go to jail? Instead, the authors' statement indicated that he believed the police officers guilty of killing Freddie Gray even before they have had their day in court.

"The point of the post is that Democrat governance and police leadership are complicit in the fate of Baltimore."

Then why the necessity to even mention such a small number of bad apples in the Baltimore PD? If the author wanted to mention them, he could have also noted that such instances of wrong doing on the part of the BPD was unusual and rare in such a large force.