InTrade, possibly the most accurate political prediction market in the U.S., now shows the Scott Brown vs. Martha Coakley special election as a dead heat. Less than 48 hours ago, Coakley was trading 77 to 23 over Brown. 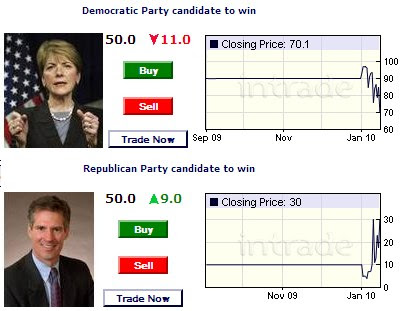 Each candidate trades at 50.0, a stunning reversal for Coakley who once traded at 96. Shares in Brown have risen from 5 in a matter of less than a week.

InTrade's accuracy is well regarded. That the race is now even money speaks volumes for the reversal of fortune.


Linked by: Hot Air, Patterico's Pontifications, The Strata Sphere and Wizbang. Thanks!

at 11:46 AM
Email ThisBlogThis!Share to TwitterShare to FacebookShare to Pinterest
Labels: Democrats, eBusiness, Healthcare

that is the biggest crock...of..

your poll can stuff it, eat it...or whatever...

Does that include the the additional votes the Democrats will mysteriously "find" a week after the election?

Well for what its worth, right now its roughly 55-45 in favor of Brown. Chances are it will bounce around all day... Still far better than yesterday when Coakley was trading in the 60s.

Enough polls have come around to show Brown with a 3-4 point lead to make it pretty clear that's where the race stands right now. Brown's internals have him leading somewhat more; Coakley's have it even. Its just a matter of if the race continues like this until Tuesday. So far the money is saying that it will.

I can't believe what a piece of crap a Boston Globe reporter, Adrian Walker, wrote about the race in today's web page.

First, he insults the Republican: I find it hard not to feel sorry for her[Coakley]. She is suddenly being savaged - especially in the national media - as mediocre, which she certainly is not. (That would be Scott Brown.)

Then he misquotes Scott's famous line It isn’t Ted Kennedy’s seat, it belongs to the people of Massachusetts. when the real quote during the debate was With all due respect, it's not the Kennedy's seat, it's not the Democrats' seat, it's the people's seat Perhaps the phrase has morphed somewhat, but the final senate debate was ground zero for Scott's zinger.
link to article

So much for the elete media...

Mississippi? Without a doubt.

Having said that, I refuse to believe that - given all that the GOP has done to this once-great nation in the past decade - the good people of Massachusetts would be stupid enough to send a Republican to Washington at this point in our history.

I'm sorry but I just refuse to believe it.

Eh, what about New Jersey?

Crushing defeats for the Party of Marxism and Wealth Redistribution.

The American people in every state have been pushed too far by this destructive administration.