'This is our moment': US Government running annualized $1.55T deficit as hope, change and central planning policies poison economy

Another economic record has fallen by the wayside as President Obama's plan for reshaping the economy takes hold. Virtuous Republic points us to the Treasury Department's December 2009 Budget numbers (fetchingly titled "SUMMARY OF RECEIPTS, OUTLAYS AND THE DEFICIT/SURPLUS BY MONTH") -- and they represent startling evidence of the Democrats' ruinous fiscal policies.

...despite running an almost $92 billion dollar deficit in December and a $388 billion fiscal year deficit, the Obama administration and the 100% controlled Democratic Congress have little to show for it. Unemployment remains at 10% and 85,000 Americans lost their job in December. 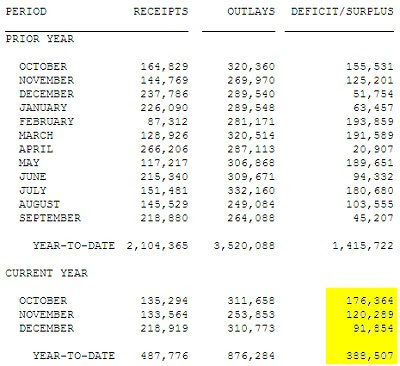 So Soviet style, top down, 5 year like plans have failed miserably throughout history and they are failing now. I guess that is policy you get when your ruling elite class attends a university system that is the last refuge for aging Marxists.

It gets better, well better if one is lecturing a bunch of leftists who hate the capitalistic system that allows them to excel. Tax revenues are down and of course that points out the obvious, that the Soviet like economic policies of our Democratically controlled government are failing to revive American business and the fortunes of the employed (or those who would like to be employed). Declining revenues might be one thing if they were caused by actual tax reductions for individuals and business, but that isn’t the case as the Obama “tax cuts” are only reductions in withholding (just wait until April comes around).

Yep, you read that right: individual income taxes are down nearly 20% year-over-year, while corporate income taxes have dropped nearly 33%!.

But remember, folks, President Obama says the recession is over.

Perhaps that's because it's transitioned to a flat-out depression. And, don't look now, but socialized medicine represents the coup de grâce to an economy that is wheezing, flat on its back. 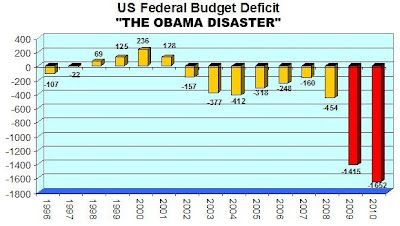 Fasten your seatbelts, kids -- it's gonna be a bumpy ride.


Linked by: Patterico. Thanks!

My (small) company alone accounts for approximately $1M of the shortfall and I don't see any end in sight. At first, I resisted the hypothesis that the administration and the leftists in Congress were intentionally creating a collapse so that they could rebuild a system aligned with their ideology. Now I'm coming around. If they manage to game the election system with universal voter registration and immigration "reform", our only recourse will be to take it to the streets.

Thanks for the mention.

Pretty sad that all the billions Obama has spent and he has nothing to show for it. Our roads aren't paved. Are bridges are still crumbling. There are no modern rail lines. Hell, there aren't even any windmill whatchamacallits....

Your blog is so excellent. I am your regular reader of your blog.

I am honored to add it to my blog in right side bar links.

Will you add my blog in your blog list

Thanks for visiting my blog as well!

My Open Letter (Blog) has been sent Five Lak (500000) to International Community for the welfare of Humanity till today. I Agha Dilbar authorize Newspapers, Magazines, Internet, to Publish and Radio, T.V. Channels to broadcast this letter all round the World.
Website: http://aghadilbar.webs.com

Dear President Barrack Obama
the Great Leader of the World
I Agha Dilbar have sent Mr. President 100 registered research Letters (1000 new ideas to develop America and to Change the World for Peace and Prosperity)
through Embassy of USA Islamabad till today and also direct sent these registered Letters to Whitehouse Washington DC 20500.These letters have been written on the guidelines of CHANGE WE NEED. And these letters are about the Common Men Problems of respected American Peoples and their Solutions. To end, Economic Recession, Unemployment and to Finish War, all round the World for Peace and Prosperity. In these letters I have sent one thousand new scientific Planning /Suggestions, about every walk of life for Peace through Friendship Progress and Prosperity all over the World.
My dear Barack Obama, the great leader of the world, my friend, my brother, provide an opportunity to Agha Dilbar to pay an official visit to America, that we two brothers sit together and by halting this horrible war.
In this war 1-million people have died from 9/11 till today, if this war continues, it will become the 111- World War.200-Million people would die, if 111-World War is triggered) can take out 6.5 billion people of the World from abyss of destruction and then put them on the road to Progress and Prosperity.
Dear President Barrack Obama considers, from 9/11 till today, America has conducted many war operations in connection with War on Terror, resulting the circle of war has spread hundred times. Millions innocent persons have died.
In this war. Many More have been rendered homeless. One Lak (10000) war affected youth joined the army of Al-Qaida and Talban by the help of anti American countries have begun gorilla war in a horrible manner. It is the result of wrong war strategy. I Agha Dilbar desire to solve all above mentioned problems in a meeting with President Barrack Obama by adopting new revolutionary planning by bringing an end to present gorilla war in Iraq, Afghanistan and Pakistan. In the result the World can enter in a peaceful, advanced and progressive world, May it be so.