War On Terror: By refusing to acknowledge the role of al-Qaida-linked terrorists in the Benghazi attack, the administration has kept our military from hunting down and killing people responsible for the deadly 2012 attack. 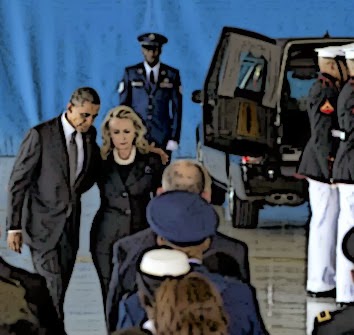 There would seem to be no shortage of targets for America's fleet of drones after the Senate release of a report documenting, despite the efforts of the New York Times and others to revive the video lie, the presence and participation of terrorists from no fewer than four al-Qaida-affiliated groups on the ground in Benghazi.

Among the al-Qaida-affiliated groups involved in the Sept. 11, 2012, terrorist attack, according to the Senate report released last week, were groups such as al-Qaida in the Islamic Maghreb, al-Qaida in the Arabian Peninsula, the Mohammad Jamal Network and Ansar al-Sharia, the terrorist group that actually took credit for the attack as it was happening, according to communications received by the State Department that night.

A month later, President Obama said of the attack that "my biggest priority now is bringing those folks to justice, and I think the American people have seen that's a commitment I'll always keep."

Yet so far the only individual apprehended and incarcerated for the Benghazi attack is the hapless Coptic filmmaker responsible for the video the Obama administration used as an excuse, even though, as we have noted, military leaders informed the president that night that it was a terrorist attack.

As The Hill reports, it is the refusal by Obama and his administration to designate those responsible for the attack as members of al-Qaida or its affiliates that prevents the U.S. military from apprehending or targeting them under the Authorization for Use of Military Force (AUMF), which allows the military anywhere in the world to move against al-Qaida and "associated forces."

It's tantamount to letting the murderers of our State Department personnel and fellow citizens walk free.

As Joint Chiefs of Staff Chairman Martin Dempsey told the House Armed Services Committee on Oct. 10 in newly declassified testimony, without that official presidential designation these groups and their members "don't fall under the AUMF authorized by the Congress of the United States. So we would not have the capacity to simply find them and kill them either with a remotely piloted aircraft or with an assault on the ground."

Even now, with its Benghazi lies and the false narrative about the video fully exposed, the Obama administration refuses to acknowledge that not only is al-Qaida not on the run, but it has metastasized like a cancer.

The worldwide terrorist movement now has groups active from Libya to Syria to Iraq, where the black flag of al-Qaida has been seen flying in Fallujah, the city where American forces won a hard-fought and bloody victory.

The AUMF law, passed after the Sept. 11, 2001, attack on the World Trade Center and Pentagon, is what allowed Obama to authorize hundreds of drone strikes in Yemen, Somalia, Libya and Pakistan.

It was also the authorization for several special operations raids, including one that took out Osama bin Laden.

It's not like al-Qaida hands out membership cards and holds lodge meetings.

"What many officials may not realize is that al-Qaida has long issued general guidance to its members and allowed its affiliates to determine how best to implement the attacks, which means 'core al-Qaida' may never have issued specific orders," says Dan Green, a fellow at the Washington Institute on Near East Policy.

Caitlin Hayden, a spokeswoman for Obama's National Security Council, says the U.S. remains "focused on bringing the perpetrators of the Benghazi attacks to justice."

Well, there's one way to prove it. If these groups walk like al-Qaida and attack like al-Qaida, then they must be al-Qaida. Designate them as such under the AUMF and turn the military lose.

OBAMA IS ON THE OTHER SIDE.

This photo makes me sick.

"my biggest priority now is bringing those folks to justice" My emotions upon reading this went from laughter to tears. If his mouth was moving he was 'untruthful.'

At what point should this be considered aiding and abetting the enemy?

Yea too busy to go after Islamist foreign enemies, but lots of time and money are found to conveniently make law-abiding American people into criminals so in the eyes of the State they will have "legitimate" reason to use the military and all those drones against them.

Funny how that works.
Must be all that talk about fundamentally transforming America, or some such lies in a river bullshit we are being fed.

Obama contines to aid and abet Al Queda with more than just American funding and weaponry, by refusing to admit Al Queda, his dear fellow muslim buddies, were involved. DUPICITY

They're just waiting for the right time to kill the Benghazi attackers....some time in 2016 I bet.