Can y'all fetch Prezzy an ice-pack? 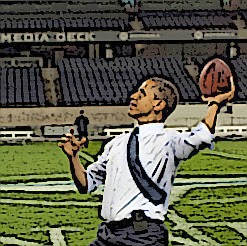 Mark Levin opened his show today hitting Obama square between the eyes in response to him saying yesterday that he wouldn’t let his ‘son’ play football:

So he wouldn’t let his son play football – this pretend son that he has. It’s like Jimmy Stewart with the pretend rabbit.

Well let me tell you something Mr. President. I wouldn’t let my son be an ambassador under you. I’d much rather that he played football.

You can hear the audio at The Right Scoop.

I wouldn't be surprised to learn Obama is post-abortive.

Someone probably polled and found staying linked to Trayvon and young black males makes him look more like a daddy to supporting females, and increases sympathies, and poll values for him.