GENIUS: House Leaders Prepare to Push Amnesty Though Only 3% of Americans Believe It's a Priority

As Speaker John Boehner and House Republicans gear up for an internal debate over whether to address immigration in 2014, a new Gallup poll lends support to those who want to delay consideration. The poll found that only three percent of Americans think immigration is the top problem Congress must tackle this year. This is consistent with rankings in the recent past so why does Boehner consider immigration to be urgent or even a priority? 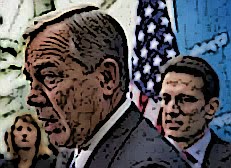 Of the new poll, Gallup’s Lydia Saad said, “Americans start the new year with a variety of national concerns on their minds. Although none is dominant, the government, at 21%, leads the list of what Americans consider the most important problem facing the country. The economy closely follows at 18%, and then unemployment/jobs and healthcare, each at 16%. No other issue is mentioned by as much as 10% of the public; however, the federal budget deficit or debt comes close, at 8%.” And below that at 3 percent, just above "lack of respect for each other," comes immigration.

There are a variety of reasons why Americans' top priority is the category “dissatisfaction with government/Congress/politicians; poor leadership; corruption; abuse of power.” Anyone who reads or listens to the news knows there have been a string of governmental failures and outrages, including President Obama’s setting aside enforcement of the immigration laws he does not like. Second and third come the economy and unemployment – two matters that Congress has debated for years but failed to address, at least in any effective manner. That in itself is an outrage. Unemployment remains high, especially for less-skilled/educated Americans and young Americans, and long-term unemployment is forcing people to abandon the workforce. The labor participation rate is the lowest it has been in the last 36 years yet politicians find time to address everything but putting Americans back to work.

Perhaps that is changing now that the President has “pivoted” to jobs and Speaker John Boehner said jobs would be the House’s top priority this year. “Our focus will continue to be on jobs,” he said. Actually, that's not true but it sounds good at the beginning of a new congressional year. “All during the break, I kept hearing from people that they wanted us to focus on the economy. The American people are still asking the question: ‘Where are the jobs?’” he said. If he follows through, that would at least make action in the People’s House more consistent with the people’s wishes as evidenced by the Gallup poll and many others. So why is Boehner pushing to take up immigration -- a low-priority in the people’s eyes – when the solutions Republicans are said to be considering can only detract from his top goal?

Boehner is a leader who, although mindful of the polls, is largely motivated by the desires of his Republican caucus and business groups/campaign donors. We know that he’s listening to his caucus on immigration because he promised not to bring up related bills unless they're supported by a majority of his caucus. He doesn’t often publicly promised to comply with the so-called Hastert rule, and has never gone back on his word when he did, so this is important.

As for business groups, to deny that they have Boehner’s ear would be like denying that the National Security Agency collects a lot of data. And the truth is, business groups want a comprehensive amnesty irrespective of what the people want or how severely it hurts American wage earners. They want more high-skilled foreign workers. They want more guest workers in the low- and medium skills range. And they want a legalization, if not citizenship, for illegal aliens.

You might ask, how can Boehner not see the incongruity? Advocating simultaneously for policies that, on one hand, put more Americans back to work while, on the other, give out work permits to millions of additional foreign workers. Bringing in more cheap foreign labor will exacerbate long-term unemployment, not turn it around.

House Republicans will soon leave town for their annual retreat where the topics of jobs and immigration will be discussed. Boehner’s staff have been vetting draft GOP immigration principles within the Republican caucus in advance of the retreat. While the one-page document is supposedly vague, it reportedly reflects much of what was contained in the Senate-passed comprehensive amnesty.

Since he’s working under the Hastert rule, Boehner will try to convince a majority of Republicans at the retreat to support his statement of principles. You can be sure that Republicans who oppose moving legislation this year will argue that Boehner’s immigration push is incompatible with his top priority -- putting Americans back to work -- and the desires of the American people.

When you think about it, the fact that Boehner is carrying water for the cheap labor lobby demonstrates why most say their top priority is “dissatisfaction with government/Congress/politicians; poor leadership; corruption; abuse of power.” Boehner would never see it that way but let’s hope his caucus realizes that they can begin to address the public’s top three concerns by telling Boehner to start over again with an enforcement-only focus.

republicans dancing to big money donors .. rinos out of touch will middle America.. jobs are scarce yet illegalls amnesty will open millions more onto job market....
Vote out rinos in 2014 or better yet run 3rd party against rinos who care little about America except their own rear ends