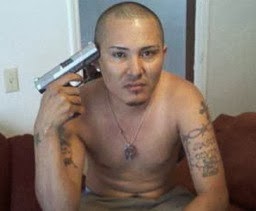 The first criminal alien from El Savador was sentenced to 40 years for rape, kidnapping, and robbery.

His partner was found guilty of 41 charges, stemming from a string of robberies in South Nashville, which culminated in a rape of an 11-year old girl during one of their crimes. He was sentenced to 75 years in prison.

So... here we have a team of illegal aliens, brandishing guns, robbing homes in South Nashville over a three month period and -- in the process -- raping a child.

Yet there are still those who still condone and encourage the illegal invasion of millions of people across our borders. I can’t buy Sudafed with a license, but robbers, murderers, and rapists are allowed to cross our borders freely.

Only after they have harmed American citizens does the government do something. Think about that. It takes rape and murder for the feds to act.

First, we must control our borders. Secondly, only a limited number of highly vetted citizens from Latin and South America should be allowed to enter our nation.

Of course, for our side, that would dry up cheap labor. And for the Democratic-Marxist Party, that would frustrate their plan to change the ethnic makeup of America in order to increase the dependent classes that vote for them, depress wages, destroy the middle class and their bourgeoisie values of faith, hard work, private property, and capitalism.

They raped an 11 year old girl. Do you really want more of this?

We need these people. We need drug resistant TB, lice, bedbugs, and a host of other diseases. We need people who are illiterate in their own language, not to mention English. We need masses of people used to a society that doesn't work that is dominated by patrons, caudillo, and warlords.

By the way read the history of Rhodesia, Argentina or Cuba if you want to see what happens when diversity is achieved.

It's looking like the GOP is about to facilitate their retention, and create fresh incentives for other illegals to wetback our borders.

Makes one wonder what bloody good the Republicans in the House of Representatives are, doesn't it?