BOEHNER ON LENO: An embarrassing, wheezy, boozy debacle that proves he's unfit to be Speaker

“By now, everyone should understand President Obama was the driving force behind the partial government shutdown because his first and only priority is protecting his failing health care law,” Michael A. Needham, chief executive officer of Heritage Action for America, told The Foundry. 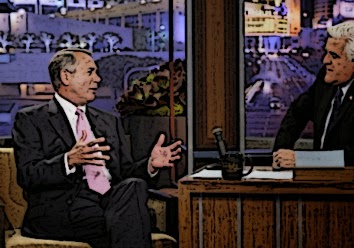 The ever-shakier implementation of Obamacare proves that conservatives who tried to stop it were correct, Needham said.

Boehner, making his debut last night on NBC’s “Tonight Show,” said some in the Republican conference created “a very predictable disaster” in October by disagreeing “tactically” over how to delay Obamacare.

“You learn that a leader without followers is simply a man taking a walk,” Boehner told Leno. “So I said, ‘Do you want to fight this fight? I’ll go fight the fight with you.’ But it was a very predictable disaster.”

The Ohio Republican also took a veiled swipe at Heritage Action [Ed: and other groups], which had argued in favor of efforts by conservatives to defund Obamacare. “My problem was with some Washington organizations who purport to represent the Tea Party, who I think mislead them,” he said. “There’s nothing I could do that was ever conservative enough for them.”

“Leaders lead — they don’t blame their conference. Americans are learning every day why those legislators who had the courage to do everything they could to stop Obamacare before it took root in America were correct to do so.”

Boehner did sound a conciliatory note about the GOP’s internal disagreements, telling Leno:

“Listen, you know, the funny thing about the so-called infighting is that we agree on all the goals. We think Obamacare is bad for the country, we think we shouldn’t spend more than what we bring in, we think the president’s ignoring the laws. It’s all a fight over tactics, it’s not over what our goals are.”

Democrat In All But Label Only

Democrat in D-something Label Only

Democrat in Label D-something Only

Boner is just a fool out taking a walk with a cig in one hand and a bottle in the other.

No one is following the drunk.