Had the media been doing its job during the campaign for the governorship of New York, Andrew Cuomo would be a punchline, not a high-ranking official. Cuomo's role in the housing meltdown -- serving as Secretary of HUD for Bill Clinton -- earned him the nickname "Architect of Ruin". He was the nation's foremost purveyor of subprime loans, using the force of law to compel financial institutions to disregard traditional underwriting norms and instead issue mortgages to those who could never repay them. 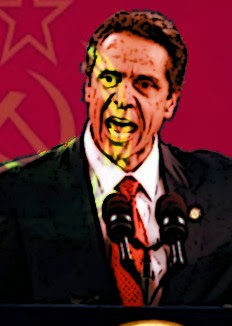 Cuomo is a radical Marxist progressive who believes in a single party, totalitarian government and admitted as much himself.

In [a] radio interview [public radio's "The Capitol Pressroom" on Friday], Cuomo detailed what he sees as a "schism" in the Republican Party among an "extreme" faction and a "moderate" faction.

"Are they these extreme conservatives, who are right to life, pro assault weapon, anti-gay, is that who they are?" Cuomo said Friday. "Because if that is who they are, and if they are the extreme conservatives, they have no place in the state of New York. Because that is not who New Yorkers are." ...Later in the [interview], Cuomo said it was "fine" to be opposed to abortion and same-sex marriage, but that it's "not the opinion of this state." ...

In other words, Cuomo took an oath to uphold the United States Constitution, but routinely spits on it instead.

He now claims he was misinterpreted.

..."When you listen to the complete interview, it is clear that the Governor was engaged in a discussion on political campaigns and responding to a question about fundraising for his own campaign," the letter reads. "He was talking strictly about the two parties and political candidates, and making an observation that far right candidates cannot win statewide elections in the New York because their political philosophy is not a reflection of the state’s electorate."

No, Cuomo: it is you and the rest of the Marxist left that are the extremists. For it is you who are dismantling the nation's highest law, bankrupting it financially and morally, erasing its borders by encouraging illegal immigration, partnering with terrorists like the Muslim Brotherhood, weakening its national security apparatus, and targeting your political opponents.

No, Cuomo: it is you and your party who are the radicals that threaten to destroy this country, just as you destroyed the housing market.

You are a disgrace and a menace to America.

Enough of these pompous pricks who think they have some special right to rule over us, destroy our country for their personal gain through a system of unparalleled crime.

As a fellow American commented:

"Who are we? Why we're the armed citizens who are going to bury you and you're whole damned dictatorship of the proletariat if you keep pushing us."
- http://sipseystreetirregulars.blogspot.com/2014/01/collectivist-chump-cuomo-to-catholics.html

Sorry if you live in NY its because you wish to live under a fascist form og government that views all who hold opinions other than the official "approved" views as untermensch.

If you choose to live in NY it because you wish to fullfil this role. NY state hasn't been a descent place in thirty years.

We should be making allowances for pretentious little twits like "Lil Mario Andy". His problem is genetic, he really can't help himself.

You have to hand it to him though. . . .he is consistent.

The Laws and Doctrine of the Roman Catholic Church: . . . .not so much again.

No on Right to Life

No on Living in Sin with his celebrity squeeze.

Great example for his Daughters.

One Anonymous to another Anonymous,

Yours is a fine argument until NY becomes NY & NJ;

and then every state but yours;

and then every state INCLUDING yours.

Talk about a plan for success.