Lost your health plan? Doctor won't see you? No problem, Michelle's got a plan: give her money to save Obamacare

First Lady Michelle Obama, in an act of solidarity and support for her man, has sent out a fundraising email to ask for donations to help save her husband’s failing signature program.

Here’s what she sent out today:

Earlier this month, because of what you did, it became illegal for insurance companies to discriminate against the up to 129 million Americans living with pre-existing conditions. Young Americans are able to stay on their parents’ health care plans as they get on their feet, and we can now know that our insurance companies won’t put lifetime caps on our coverage.

You should be so proud of that. That happened because you organized, you talked to your friends and neighbors, and you chipped in what you could, when you could, to elect Barack and a Congress who supported his agenda.

Today, I’m asking you to do it again.

So before Barack gives his State of the Union address tomorrow, chip in $10 or more and help protect Obamacare:

Thank you so much,

I guess that’s the least she could do, since her husband took her on a lavish 4 million dollar vacation to Hawaii just recently. 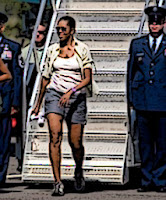 Oh, wait – WE, the taxpayers, covered that.

Well, then, maybe it’s because Barack sent Michelle to Maui AFTER the Obama family’s holiday vacation, so she could celebrate her 50th birthday with her gal pal Oprah.

Oh, wait – yeah, WE the taxpayers covered a huge chunk of Michelle’s second vacation in as many months, too.

Jay Carney admitted that taxpayers picked up some of the cost of Michelle Obama’s trip to Maui and her travel back to Washington D.C.

According to the Congressional Research Service, the First Lady typically flies in either a C-40 or a C-32 aircraft.

Based on those figures, a 10-hour flight could cost anywhere from $197,550 to $429,180, Douglas Kellogg of the National Taxpayers Union & Foundation said.

The cost of police escorts for the first family have not yet been disclosed by either Oahu or Maui police officials. (source)

If Obamacare was so great, wouldn’t it pay for itself? Instead, it’s collapsing and resolving itself under the weight of the free market. But the moochers that reside in the White House are trying to put off the inevitable end by asking for yet another handout.

How about we, the taxpayers, opt to be the Death Panel in this scenario? Let’s pull the plug, stop the life support, and let Obamacare die a natural death.

Read more at The Daily Sheeple