"The common parlance of the dictator"

MARK LEVIN: Here’s Obama today before a cabinet meeting. Some of you have heard this, some have not. Everybody needs to hear it. Go: 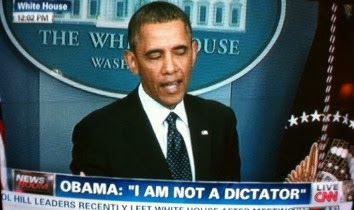 PRESIDENT BARACK OBAMA: One of the things that I’ll be emphasizing in this meeting is the fact that we are not just going to be waiting for legislation in order to ensure Americans are provided with the help that they need. I’ve got a pen and I’ve got a phone. And I can use that pen to sign executive orders and take executive actions and administrative actions that move the ball forward.

OBAMA: One of the things I’m going to be talking to my cabinet about is how do we use all the tools available to us, not just legislation in order to advance a mission that I think unifies all Americans.

LEVIN: Stop. This is the common parlance of the dictator. Assuming that he represents all Americans, that he's a unifying figure, that we just need to concentrate more power in his hands. He will decide what laws are good what laws are bad. He will use executive orders to pass laws that Congress won't pass, and he will ignore laws he doesn't like. And he’ll rewrite laws that he wants to rewrite like Obamacare and so forth. This is the mindset and the language that dictators have. He assumes to speak for everybody. He is above politics, he is God’s gift. He was put on Earth to do just this.

And yet when you go back to the Constitution, oh, written by slaveowners -- men with wooden teeth. They say the officer they say the opposite, they say this is tyranny. I say you are witnessing a gradual yet quiet coup, you just heard what he said.

Why is this man still President?
Isn't anybody listening? This is madness, the dude wants to know who ate the strawberries.

Nothing knew. Obama has been acting that way already.

And FORGET IT about a 3rd party. That's democrat thinking.

"One of the things I'm going to be talking about in my cabinet..."
It was plainly printed some years ago that he tasked his cabinet to find every possible avenue to push his agenda forward. He acts like this is new but it has been his MO from the start.
Reagan collapsed the USSR by causing them to overspend and Obama is deliberately collapsing America through entitlements, overspending, and QE. Let's take a look at where this is heading:
http://madconomist.com/what-if-us-collapses-soviet-collapse-lessons-every-american-needs-to-know


Dear lord! the guy is a left winger.

QE IS the democrat party itself.

There way of making it easier for Obama.

Inflation is coming with a Vengeance.

Entitlements are both parties fault.<~~~~ This one I call "The State Financial Shuffle".

For the reason in order to cover entitlements the states have to take from program "B" to cover Program "A", and then from Program "C" to cover the short falls of program "B".

Just go through the ENTIRE alphabet in that manner and you got the picture.

Bush Senior got it right, it's just after he placed his reforms in place it went down hill after he left office. By billy, as well as bush Jr. to be honest, and you can add Obama to that mix as well.

Well, apparently Speaker Boehner tweeted that "We still have the Constitution".

But if he & his craven RINO-pals REALLY believed that, they would have protested Obama's actions back in 2009 when he bypassed bankruptcy court to "engineer a settlement" for Chrysler that trampled the rights of secured bondholders -- and would have done so again and again, at each of Dear Leader's subsequent "over-reaches".

We only "have the Constitution" if we *INSIST* that it be honored as the law of the land. The Republicans of the 111th, 112th, and now the 113th Congress have been/ still are freaking useless at doing anything but roll-over-play-dead.

the washington ruling class of rinos and lying obama sticking it to the working class of America....
Now republicans set to pass illegals amnesty and drop opposition to obamacare repeal
Folks rinos no longer represent voters.. time to sit out 2014 or vote for 3rd party conservatives

Michael Savage said it was a coup five years ago.Savage is the man!