MARK LEVIN TO REPUBLICANS: Want to rebel against Presidential lawlessness? Boycott the State of the Union 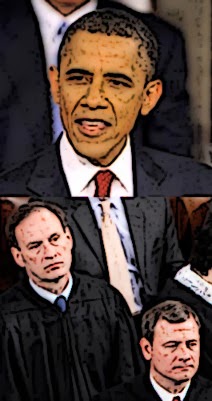 They need to do something bold that will get the attention of some of our fellow citizens, at which the media which will attack it but cannot ignore it.

If they’re not going to take a stand constitutionally and legally, they should at least take a stand on the steps of the Capitol or somewhere. Together. Shoulder to Shoulder. And say we have a lawless president doing lawless things and make their case to the American people.

It would be historic. It would be profound. That finally the opposition party demonstrates that it opposes not just the Democrat Party, but the destruction of this republic by this president and his willing dupes in Congress.

It will be interesting to see which Republicans consider this idea.

I know who won't consider it: the spineless, useless, feckless, bought-and-paid-for hacks in the GOP leadership. Yes, I'm looking at you, John Boehner. And you, Mitch McConnell.

Dream on. If they can't stand up to him in the ordinary course of events, what makes Levin think they'll take the extraordinary step to boycott the State of the Union. Cowards are cowards are cowards.

It would be interesting to see who is seated and who is standing. Even if a third protested, the message would be clear and profound.

Levin has admitted that there is a coup in progress. Symbolic actions against despotism while emotionally compelling, do not inspire votes for impeachment in a house majority of corrupt republicans.

Political grandstanding may seem futile but it is important as a way of communicating the seriousness of the situation to the citizens. It would be difficult for the MSM to ignore.

Hope the Supremes also stay away. They have Obama's insults as a solid reason.

The Joint Chiefs would be ordered to attend.

Resistance need to be gradually built. It will long stay one step behind the provocation. The key is getting a strong majority on-board.

Best would be to be in the chamber before he arrives, stay seated while he walks in, and when he begins speaking, rise, turn and walk out slowly, without acknowledging his presence.

There is no voting our way out of this. I wish Levin would face that reality instead of these pipe dreams.

Though honorable as his ideas are, he has something fundamentally correct here that bears understanding. I wonder if he knows it too.

It is the question of legitimacy and creating a crisis of legitimacy.
The act of defying those running things exposes their illegitimacy.
That's resistance they can not afford to be faced with and the truth exposed as such. It is an existential threat to those in power over us.

Go to hell Boehner, Ryan, Rubio, Grahmesty, McCain and the rest of the lying, RINOs. Take Christie with you to hell.