REALITY TV: Watch as small company employees find out what Obamacare is doing to their coverage

"They call it the affordable health plan. There's nothing affordable about it. I can't afford it."

A local news station brings viewers inside one Pennsylvania company as the employees there learn about their new health care plans under Obamacare... 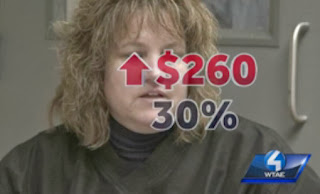 "Look at the numbers," says the reporter of two employees. "Jeff and Dave used to have a $1,250 deductible. Since Obamacare went into effect, it's now jumped 60 percent to $2,000. That's nothing compared to Brian, Kristi, and Judy who have kids. they are going to pay twice that, four grand." The reporter adds that co-pays are being increased, too.

Now pretend you're in the GOP Establishment.

What would you do to exploit the tidal wave of rage washing over the countryside as Americans discover what socialized medicine really means?

If you answered "Pass Amnesty for Illegal Aliens", you have a future working for Karl Rove and the Chamber of Crony Capitalism.

the real question they should of asked these people is ...How many of voted in the last election.. and lastly, how many of you voted for Obama..cause if you did for him you got what you asked for..

Yes, and the rest of us got screwed.