Lopez-Bautista, at his trial, called this a land of opportunity. Why, yes it is, for enterprising criminals from Mexico.

BALLSTON SPA -- Antonio Lopez-Bautista, an immigrant who entered the country illegally and attacked and sexually assaulted a 67-year-old woman on the city's west side last May, was sentenced Monday to spend a determinate sentence of 11 years in jail. 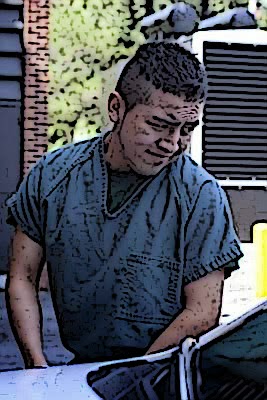 After he serves the sentence, he will be deported to his native Mexico.


Lopez-Bautista, a 19-year-old resident of South Federal Street in Saratoga Springs, was convicted of attempted kidnapping, sexual abuse, two counts of assault and criminal obstructions of breathing. He was acquitted of another assault charge, first- and second-degree robbery and attempted rape.


The violent attack was captured on surveillance video and showed Lopez-Bautista sneaking up to the victim's car and opening the door, pulling her out, dragging her down the street and ripping off her clothes. The victim was waiting for her husband to leave work at about 4 a.m.


...Before he was sentenced, an interpreter read two letters on behalf of Lopez-Bautista, one written to the victim and the other to the judge. In the letters, Lopez-Bautista apologizes many times and asks for mercy from the judge. He also says his inebriated state, from an abundance of alcohol and cough syrup, is to blame for mistaking his victim for a political oppressor in Mexico.


...On Monday, new information regarding Lopez-Bautista's illegal entrance to the United States came to light. He first came into the country illegally via the Arizona border in April 2009. He was deported that time, but successfully crossed into the country again one month later. He has illegally remained in the country since.


"I will never return to this country again, although it was filled with opportunity," Lopez-Bautista wrote.


Just read all of the stories and here that I have gathered over the years. These aren’t isolated events, but rather a wave of criminals hiding among a wave of illegal immigrants.

Stop the latter and you end the first.

Thanks for guest post. The sad thing, is that these aren't isolated incidents.

There are thousands of such stories. It is just that the national media ignores them.