So you’ve maneuvered the Obamacare website, plugged in your top-secret information and found out how much you are paying. 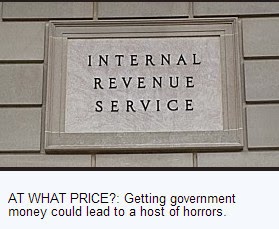 And for some of you, it turns out you qualify for a government subsidy — making the premium sound like a bargain. But signing on that line to accept the government’s cash also means you’re making a deal with the devil.

The government hasn’t told you this subsidy comes with a price — even more intrusion into your everyday life, said Joshua Archambault, a senior fellow with the Foundation for Government Accountability.

“What people don’t know is that their potential for being audited goes up dramatically,” Archambault said. “You have to release twice as much personal information than an applicant for private insurance and, depending on your income, you could actually end up owing upwards of $10,000 or more.”

Archambault has studied Obamacare extensively and his findings can be found on website his foundation created, UncoverObamaCare.org. In a report co-written with a tax attorney, ObamaCare Tax Credits and the IRS, Archambault said President Obama has asked for $440 million and 2,000 more agents for the Internal Revenue Service, ostensibly to stem an increase in tax-credit fraud.

But many of these new agents presumably will be auditing people if past history is any indicator. A 2012 congressional report by the IRS’ taxpayer advocate revealed that 69 percent of the people who claimed tax credits for an adoption were audited. Of those taxpayers, 55 percent were found innocent of wrongdoing and were even owed money, the report said.

“The IRS’ misguided procedures and its failure to adequately adjust these processes when it learned its approach was seriously flawed, has caused significant economic harm to thousands of families,” taxpayer advocate Nina Olson wrote in her report. “Unless the IRS changes its approach to refundable credits … it will continue to cause problems for eligible taxpayers, including those eligible for … the Affordable Care Act.” 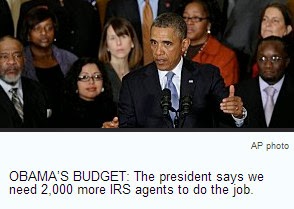 According to the President’s fiscal year 2014 budget, the IRS will “increase audit coverage to address tax compliance issues,” employing 797 agents with this task alone. An additional 573 agents will be employed to “increase collection coverage.”

If being audited isn’t bad enough, how about a surprise $8,061 tax bill at the end of the year? This very well could happen to a married couple with a combined yearly income of $60,000, Archambault laid out in his report.

Obamacare subsidies are tied to how much money a person makes over the federal poverty level and family size. It has a cap before some or all of the money must be repaid. People who work in industries with fluctuating incomes such as sales, food service or hospitality, could easily find themselves going over the allotted amount.

This has to be reported immediately to the Obamacare exchange and the IRS so the subsidy can be adjusted. Lower income individuals who don’t do this will have a maximum payback amount of either $600 or $1,500 at the end of the year.

For people who are in the middle-income range — making more than $45,960 a year for one person and up to at least $94,200 for a family of four — going over those set totals by just $10 would mean the taxpayer has to return every cent of the subsidy during the months income exceeded the allowance.

At first, Congress had limited the payback to the government at $3,500, but the most recent tinkering of the Affordable Care Act shows that it’s now unlimited.

In Archambault’s hypothetical example, one of the couple receives a small promotion and doesn’t remember to notify the IRS. Although the couple has paid $5,700 for insurance during the year, they are still required to pay back the $8,061 tax credit and are billed for interest and penalties. If the couple is unable to pay, the IRS can, as it often does, resort to wage garnishments, bank account seizures and liens, Archambault wrote.

Receiving an Obamacare subsidy also means parting with personal information that even your own family members might not possess.

A standard insurance application asks for basic facts: name, age, gender, address, whether you are a college student or have an employer offer of insurance, Social Security number and a list of family members.

But apply for an Obamacare tax credit and the government wants to know:

And, if you are self-employed:

“The potential for abuse is staggering,” Stephen Parente and Paul Howard wrote in a recent USA Today opinion piece. Parente is a professor with the University of Minnesota and Howard, a director with the Manhattan Institute.

Some of this abuse may have started already as thousands of Social Security numbers and other data have been released inadvertently by the IRS during the past few years, according to media reports.

“Consumers should fully understand the relationship they are entering into with the IRS when they sign up for an Obamacare tax credit,” Archambault advised.

I wonder if those new IRS agents will have to have medical training? As long as they have their hands in your pockets they might as well perform a checkup.

I'm sure IRS audits will be conducted fairly and evenly, regardless of whether the target lives in a republican district, attended a Tea Party meeting, or donated to a republican campaign. We can rest assured there is no desire on the part of progressive apparatchiks to redistribute tax monies from particular groups.

Force makes resistance, it's a fact of life. The irs has enjoyed the respect and compliance of Americans for many years but what seems to be happening now is the seeking out of every legitimate tax write-off and where possible the reduction of annual income. Combine this with work under the table, barter, and an attitude of non-compliance - all aimed at starving the Beast - they might get the message, they did it to themselves.
Young people would be well reminded what it was like to enjoy the robust economy created by Ronald Reagan. He pulled us back from Jimmy's high rates and paying taxes was nothing compared to the opportunities we enjoyed.
Obama is creating a slave mentality in this Country and as our Massa we know he likes the whip. We watch him party and send his family off the plantation for vacations while we are forced to double down but he will not flourish forever.